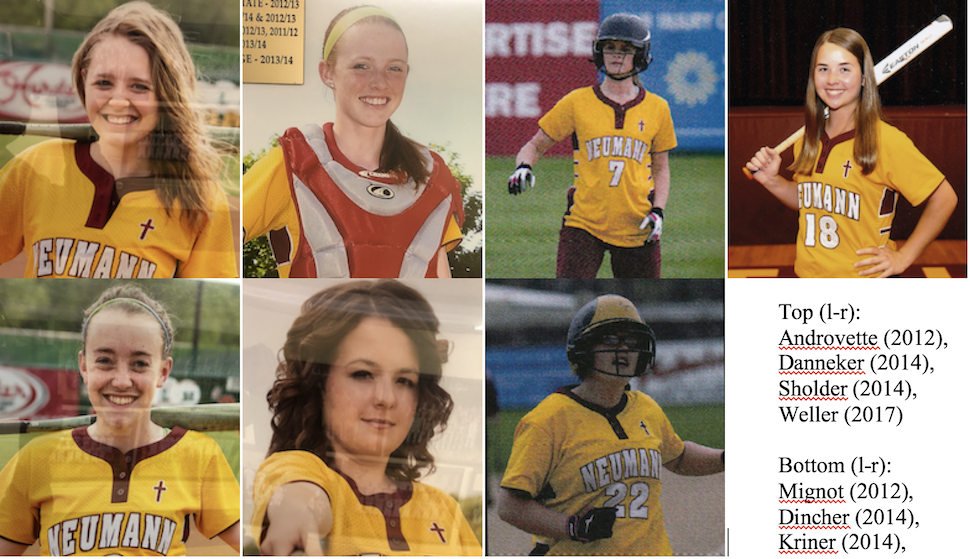 A look back at our St. John Neumann Softball All-State players.

In the storied history of the St. John Neumann softball program, seven players have been worthy of selection by the Pennsylvania High School Softball Coaches Association and given All-State recognition:

Alana played for Neumann from 2009-2012. She helped lead the Lady Knights to qualify for their first post-season appearance in 2012, with a Neumann Softball regular season record 10 wins. She led the Lady Knights with a .585 batting average her senior year, as well as hitting safely in 13 consecutive games.

Christina played for Neumann from 2010-2012. During her career, she led the Lady Knights to their first ever district playoff game in 2012. She also set the Neumann Softball career strikeout record with 325 K's, and a high school career total of 376. She won 17 games in the circle for the Lady Knights.

Rachel is the only two-time All-State recipient in Neumann Softball history. She played for the Lady Knights from 2011-2014, and was a commanding presence behind the dish during those years. She gunned down 54% of runners attempting to steal in 2014, as well as compiling a .987 fielding percentage that year, hitting .442 with 23 hits, 22 RBIs, and 24 Runs Scored.

Anne played for Neumann from 2016-2019. She earned All-State honors in her sophomore year, as she led the offense with a .512 batting average, 21 hits, 21 RBIs, and 20 Runs Scored. She also won 8 games in the circle that year, as she led the Lady Knights to their second ever district playoff appearance in 2017. Anne's pitching was a mainstay for the Knights during her four years at Neumann. Over her career, she threw 51 complete games, 8 shutouts, 2 perfect games, and won 25 games. She set the Neumann Softball career strikeout record, with 401 K's. Anne also pounded out 77 hits and a .448 batting average during her career.