Athens gets homecoming win over Canton. 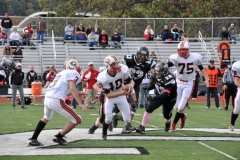 "It was a good day," said Athens coach Jack Young. "It was a nice day for homecoming and a good crowd. We're happy right now."

Junior QB Troy Stivason led the Wildcat offense, completing 6 of 11 passes for 173 yards and three TDs, including strikes of 69 and 51 yards to Ray McDougan. He was picked off once.

Senior Tyler Birdsall led the Athens ground game with 122 yards and two TDs on 18 carries, while Stivason added 49 yards and a TD on five carries and Mike Estes totaled 37 yards on two carries. In all, the Wildcats gained 215 yards on 28 carries.

John Bowman completed 6-of-8 passes for 126 yards and a TD for the Warriors, while being picked off once. Eddie Larcom led Canton with three receptions for 97 yards and a TD.

Noah Barnett led Canton with 50 yards on 10 carries and Tyler Cole added 32 yards and a TD on five carries. The Warrior ground game was limited to 62 yards on 47 carries.

After the teams exchanged punts to open the game, Canton took advantage of a short field and drove 44 yards for a TD. Cole did the honors with a 26-yard scoring run to give the Warriors a 6-0 lead with 5:24 left in the first quarter.

"We lacked a little intensity early," said Young. "Canton caught us on something early and we had to make a quick adjustment with our tackles. They didn't trap us again.

"It was all due to not fielding a punt and they pinned us deep," added Young. "We just didn't get the job done early on the first possession.

"After that, we played well defensively," added Young.

The Wildcats responded quickly with a six-play, 61-yard scoring drive. Birdsall did the majority of the damage with runs of 31 and 29 yards to set up a 4-yard TD run. Stivason's PAT kick gave Athens a 7-6 lead with 4:01 remaining in the first quarter.

After a Craig Moore sack of QB John Bowman at the Warrior 10 forced a punt, Athens took over at the Canton 36.

It appeared as if the Warriors defense would get out of the field-position jam after they sacked Stivason for a 9-yard loss on first down. However, on third-and-19, Stivason eluded a pair of defenders in the backfield and weaved his way down field on a 45-yard TD run with 36 seconds left in the first quarter to push the lead to 13-6.

After a 1-2-3 punt possession by Canton, the two teams exchanged interceptions, setting the Wildcats up at the Warriors 29.

The Canton defense pushed Athens back 2 yards on three plays, forcing a Stivason 48-yard field goal attempt. Stivason's kick hit about three-quarters of the way up the left upright and bounced back onto the field of play.

Disaster struck for the Warriors on the second play when Athens Curt Moore pounced on a fumble at Canton 20.

Facing a 4th-and-5 at the 15, Stivason scrambled around right end for 13 yards. Birdsall then capped the short scoring drive with a 2-yard TD run. Stivason's PAT kick gave the Wildcats a 20-6 lead with 2:30 left in the half.

The Warriors quickly moved the ball into Athens territory, but the Wildcats recorded three consecutive sacks - by Shane Martin, Craig Moore and Mike Estes - and used a pair of their time outs to force a Canton punt with 1:11 left in the half.

After an Athens fair catch at its 31, Stivason hit McDougan in stride on a fly pattern for a 69-yard TD with 58 seconds remaining in the half.

Three plays later, Stivason connected with Brad Sampson on a 29-yard TD pass, Stivason's PAT kick made it 34-6 with 10:27 remaining in the third quarter.

Canton put together a nice drive on its next possession, using a fake punt at midfield and a 25-yard run by Barnett, combined with a personal foul penalty at the end of the run, to move the ball to the Athens 13.

Once again, the Wildcats pass rush registered a pair of sacks to stall the drive. On third down, Estes and Craig Moore combined to drag down Bowman for a 9-yard loss, then Moore and Austin Depew sacked him for an 8-yard loss to force a turnover on downs at the Canton 30.

The Wildcats move backward on their first two plays, but on third-and-23, Estes busted a fullback dive for 31 yards to the Athens 49.

On the next play, McDougan hauled down a pass that deflected high into the air between a pair of Canton defenders and turned it into a 51-yard TD catch. Stiavson's fifth PAT kick of the day made it 41-6 with 1:30 left in the third quarter.

The Warriors scored a pair of TDs late in the game.

Bowman scored on a 1-yard run with 3:47 remaining, then after a successful onside kick, he hit Eddie Larcom on a quick slant for a 50-yard TD.

Freshman QB Aaron Barry completed 2 of 3 passes for 37 yards for Athens. Sampson had two catches for 42 yards and a TD and Garrett Clark had two receptions for 24 yards.

Athens, now 6-1, will look to clinch the NTL Large School title Friday when it travels to Wyalusing, while Canton (1-6) travels to Cowanesque Valley (2-5) Friday.