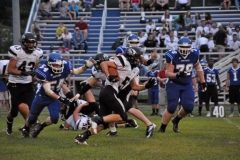 BLOSSBURG - For three quarters it was a back and forth game between the Panthers and Wildcats.

Then a 14-point fourth quarter pushed Athens ahead for the win 30-12 in NTL Large School football action Friday.

The Wildcats had two 100-yard rushers on the day as Austin Depew ran for 103 yards on 17 carries while Tyler Birdsall had 142 yards on 12 touches.

Troy Stivason led off the Athens scoring with a 42 yard field goal with 2:28 left to play in the first quarter.

North Penn took the lead in the second quarter as Taylor Hillson hit Sam Bohnert for a 21-yard scoring strike with 11:17 left in the opening half. The kick failed but the Panthers led 6-3 at the half.

In the third quarter Athens retook the lead as Stivason punched one in from a yard out. He kicked the extra point to put the Wildcats up 10-6.

North Penn would bounce back as Hill found Bohnert for a five-yard scoring play. The kick failed but the Panthers led 12-10 with 7:52 left in the third quarter.

Athens struck back quickly as Depew ran for a 23-yard strike. The two-point conversion failed but Athens retook the lead 16-12.

In the fourth quarter it was all Wildcats as Stivason found Ray McDougan for an eight-yard touchdown pass. The Stivason kick was good and Athens led 23-12 with 11:53 left in the game.

The Wildcats would shut the door as Tyler Forbes had a 30-yard rushing touchdown to make it a 30-12 final after the Stivason kick.

Stivason was 11-for-23 on the day for 99 yards. McDougan was his top target with six catches for 45 yards. Garrett Clark had two for 20.

For the Panthers Hillson was 10-for-23 for 169 yards with two touchdowns and two interceptions. Bohnert was their top receiver with six catches for 125 yards.

The Wildcats stymied the Panther's ground game, holding them to 29 yards rushing on 31 carries.

Athens will face Towanda next week while North Penn travels to Canton.