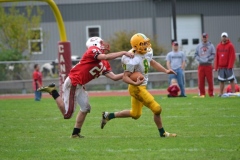 CANTON - The Warriors pulled away with their first win of the season during high school football action yesterday in Canton. They were unstoppable, as the visiting Wyalusing Rams unable to put a conclusion to their offense, and the Warriors rolled to a 44-13 win.

The Rams received the kickoff, but turned the ball over to the home team on the third play of the drive as Wes Moore intercepted quarterback Andrew Pickett's pass. Canton set up at the Wyalusing 42 yard line to begin their first drive. Eight plays later, sophomore John Bowman ran in two yards for the Warrior's first score. Brian Jannone's PAT was good, and Canton now led 7-0 with 7:55 left to play in the first quarter.

Wyalusing's Tyler Fenton gave them their first punt of the night, and Canton regained possession, only to fumble four plays later and hand it right back over. Fenton again punted, and Canton had the ball on the Wyalusing 15. A Rams penalty gave Canton an advantage, and six more points were added to their place on the board as Wes Moore leaped into the end zone for the five yard touchdown. Jannone's kick added the extra point, and with 1:20 left, the Warriors now led 14-0.

The second quarter began with a Wyalusing possession that lasted only four plays. Canton acquired the ball yet again, and a ninth play field goal from Brian Jannone extended their lead, 17-0.

Canton's next drive ended in another score. A ten yard run by Moore set the offense up at the Wyalusing 39, and Eddie Larcom raced down the left sideline for the score. The Rams answered right back, making it all the way to Canton's 13 yard line. On fourth and four, the Wyalusing offense confused the Canton defense, and quarterback Andrew Pickett ran untouched into the end zone for the Rams' first points of the game. Dylan Otis' PAT was true, and Canton's lead was cut, 24-7.

The roles were reversed, and the Warrior's quarterback John Bowman completed a 42 yard screen pass to Wes Moore. From there, two plays was all it took for Canton's Tim Bassett to scramble up the middle of the field for the touchdown. Jannone's extra point was good, and the Warrior's lead was raised to 31-7 with 0:39 ticks of the clocks left. A no gain play from Wyalusing sent the teams into the locker room.

Much like the first half, Canton's first drive of the second ended in a touchdown. On second and one, Moore ran it in for his second touchdown of the afternoon. This time, the extra point was wide left, and with 7:49 left, the scoreboard read 37-7. Two penalties on the Rams on their next drive would make it hard to gain enough first downs, and they turned the ball over with a Pickett interception on the twelfth play. Chase Pepper would give the Warriors their first punt of the night, giving Wyalusing the ball at their own 27-yard line.

Fenton would then punt again, and Canton retained the ball, beginning their drive on their own 45. Ten plays later, sophmore Theron Binford would run three yards in for the touchdown. The PAT was yet again true, and the Warriors took a 44-7 lead with 4:07 left to play.

On the final drive of the game, Justin Haley would run nine yards on first and fifteen to set the Rams up at the Canton 15. A pass from Haley to Hunter Brewer gave Wyalusing the buzzer beater touchdown, and the final score was set, 44-13.

Wyalusing will play Pius X high school next Saturday at home, and Canton will travel to Sayre to take on the Redskins.