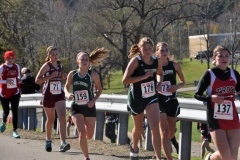 As Troy's Casey Norton and Wyalusing's Erika Huffman started to come across the bridge midway through the race Huffman stopped, leaving the race with an injury.

She managed to fight through the pain and finished the race in 28th place in 22:30, but it wound up being Norton's day as she won the title at the race for the second straight year, finishing in 18:53, to top her time from a year ago.

"I felt good, but I really felt so bad about Erika, I didn't want to win like that," Norton said. "I feel good, I definitely have improved with my times. I PR'd here last year and I have seen my times improve all year this year."

The plan on Saturday was for Norton to go out early and try and stay with Huffman throughout the race.

"I wanted to try and stay up with her," Norton said. "She gets away from me pretty fast sometimes. She said her leg got a Charlie horse and that's what happened."

Norton could tell prior to Huffman's injury that the two of them were starting to slow down.

"I did think I have to pick it up," she said. "I think we both slowed down some, our pace was getting slower."

Early in the season it was an injury that Norton had that slowed her down, now with districts approaching in less than two weeks, Norton is running her best.

"I had a really early injury and I had to take four days off for that," Norton said. I had to recollect myself and get to it. I have improved a lot, I am feeling great."

Werner tried to catch up to Norton in the race, but when she realized Norton was too far ahead, she settled in to take second.

"I tried to go a little faster, but I just couldn't get up there, so then I just felt good where I was," Werner said.

There were some nerves in her first varsity coaches invitational, but as the race got going Werner felt good.

"I was nervous, but I just tried to do my best," she said.

"It was awesome, I think we did really well," Foster said.

"We worked together well," Purdy added.

The two Towanda runners ran together all race and that was their plan going into the day.

"We like it that way, we do our best when we run together," Purdy said.

For both runners having the other there makes things easier.

"It definitely helps me a lot, I wouldn't know where to go without Destiny," Purdy said.

Next up is districts and the Black Knight pair is hoping for success at Bloomsburg.

"I think districts will be a lot of fun," Foster said.

Mansfield had two of the next three finishers with Violet Learn finishing fifth in 19:53 and Simone Lichty taking seventh in 20:01.

Finishing sixth in 19:54 was Sayre's Katie Hurley, who went below 20:00 for the first time at the league meet.

"It felt amazing, I never broke 20 minutes before and I broke it today," Hurley said.

Running up with the top girls in the NTL, Hurley just kept pushing herself to stay with them.

"It definitely makes me keep going faster with all those other good runners," she said.

The way she ran Saturday will give Hurley added confidence going into districts.

"I'm not one to have a lot of confidence, but this makes me feel better about how I am running," she said. "I am really happy this is a good race for my senior year."

For Jackson and Coffee, both freshmen, it was a great day.

"We did really well, it's exciting," Jackson said.

To be up in the top 10 running with the league's best was giving both runners a lot of confidence.

"That felt amazing, I didn't know I could do that," Jackson said.

For the first half of the race Jackson was running near the front of the pack with Learn and it was giving her confidence that she could stay with runners like that as long as she did.

"I tried to run with Violet and I kind of did, she just got away from me later on," Jackson said.

Towanda's Dani Zatkos, who took 10th in 20:42. After Towanda went 1-2-3 on the Green Hornets in the dual meet, the two young Wellsboro runners knew they were putting their team in a good position to try and win Saturday.

"They kept telling us how close we were," Coffee said. "To be able to see them was good, because then we knew we could do it."

After their team won on Saturday, the Green Hornets are hoping for a big showing at districts.

"I think I can try to make it to states as an individual and we can try and make it as a team," Jackson said.

And, if the Green Hornets can get their entire team to states, it's something that would be exciting for them.

"That would be amazing," Coffee said.