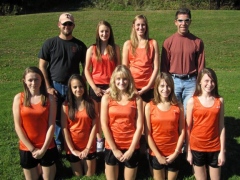 "We were close last year, but to complete the deal is pretty awesome," Towanda coach Leo Harris said. "It's a great group of ladies, and it's been a lot of fun. They worked very hard. It truly is a team effort."

For Harris it has been fun watching the group work and improve the past few seasons.

"They've always been pretty good, but to be able to say they have reached the point of being the best right now, it's been great development for the young kids. Last year we ran with five kids and almost won the championship, we just didn't have the depth."

Harris was really happy for his seniors Foster and Zatkos.

"For Destiny and Dani to go out as champions and we still have a large part of the season left," Harris said. "The first part of history has been made. They are an undefeated championship team and that's something that will never chance. As their coach I'm just so proud of them."

Towanda won all three matches 15-50 and all the other teams had incomplete teams against each other.

For Towanda this is the first goal, and now they look toward the NTL meet on Saturday and districts in two weeks.

"It's going to be a challenge," Harris said. "Several teams that are very, very close, as the scores through the year have shown. We want to see where we finish and we will just go from there."

The Green Hornets finished the dual meet season with a pair of wins.

Waverly is at Newark Valley on Friday for the Bob Green Invitational.