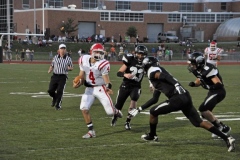 ATHENS - Zack Cooney and Austyn Bostwick hooked up for three TD passes in leading Waverly to a 24-21 non-league win over Athens here Friday night at Alumni Stadium, but the biggest plays of the night were made on defense by Cody Marchese in the game's final 20 seconds.

After the Wolverines took the lead on a 26-yard TD from Cooney to Bostwick with 7:05 remaining in the game, the teams exchanged punts and the Wildcats took over at their 24 with 3:29 left.

Junior QB Troy Stivason completed passes of 32 yards to Garrett Clark, eight yards to Mike Estes and 16 and six yards to Curt Moore to move the Wildcats to Waverly's 8-yard line with 20 seconds remaining in the game.

Stivason then launched a high-arching pass toward the corner of the end zone to Clark, a 6-6 senior, but Marchese was able to break the play up with 13 seconds remaining.

On the next play, Stivason dumped a ball to Ray McDougan in the flats at the 5-yard line, but Marchese led a trio of Waverly defenders on the tackle with 8 seconds remaining and time expired before the Wildcats could get another play off.

"It was a really big play by Cody (Marchese) in the end zone to go up against Garrett (Clark) and knock that ball down," said Waverly coach Jason Miller. "That's a tough play. He's one-on-one out there with a 6-foot-6 kid."

The game started rather auspiciously for the Wolverines as they fumbled the opening kickoff and Athens' Tim Stanton pounced on it at the Waverly 20.

Six plays later, Tyler Birdsall bulled in from the 1-yard line to give the Wildcats a quick lead. Troys Stivason's PAT made it 7-0 with 9:28 remaining in the first quarter.

The big play of the drive was a 12-yard scramble by Cooney on a third-and-13 play. Two plays after Anthony Girolamo secured the first down with a 4-yard run, Cooney found Bostwick wide-open in the flats and he outran a pair of Athens defenders to the pylon for the score.

Dan Hyland's PAT kick tied the game with 9:03 left in the first half.

Three plays later, Cooney hauled in an interception off the hands of an Athens receiver to give the Wolverines the ball at their own 42.

On the first play, Cooney connected with Bostwick, who had seven catches in the game for 136 yards, on a 33-yard pass to the Athens 25.

The Wildcat defense stiffened at the 20, but Hyland gave the Wolverines a 10-7 lead with a 37-yard field goal that barely scraped over the cross bar.

Athens' next possession ended poorly as well when Bostwick picked off a Stivason pass at the Waverly 18.

Nine plays later, Bostwick ran under a Cooney pass for a 41-yard TD to put the Wolverines up 16-7 with 42 seconds remaining in the half.

The third quarter was all Athens as it took the ball on the opening possession of the second half and marched 67 yards on 12 plays to cut the deficit to 16-14.

Austin Depew, who led Athens with 72 yards on 13 carries, picked up 34 yards on four carries in the drive, which culminated with a 10-yard TD pass from Stivason to Curt Moore.

The Wildcats seemed ready to take control of the game a few minutes later when Curt Moore blocked a Sam Kolesnik punt, giving them the ball at the Wolverines 36, but two plays later a botched exchange between Stivason and Depew resulted in a fumble that Waverly's Joe Bennett pounced on at the 34.

Waverly's momentum was short-live, however, as it turned the ball over on downs at its 43 when Dylan Gutierrez was stood up by the Wildcat interior line for a 2-yard loss on a fourth-and-1 play.

Four plays later, 6-5 Brad Sampson boxed out a Waverly defender in the corner of the end zone and hauled in a 21-yard TD pass from Stivason to give Athens a 21-16 lead with 11:23 left in the game.

After an exchange of punts, Waverly took over at its 30 and drove 70 yards in six plays - aided by a roughing-the-passer penalty - to take a 22-21 lead with 7:05 remaining.

Cooney provided a key play in the drive when he eluded a tackle in the backfield, bounced outside and scampered 28 yards to the Athens 41.

Following the roughing-the-passer call, Cooney found Bostwick, who hauled the ball in over an Athens defender in the corner of the end zone, for the game-winning score.

The Wolverines tacked on the two-point conversion to make it 24-21 when a diving Bostwick hauled in a Cooney pass in the front corner of the end zone.

"These types of games make you a better team," said Miller.

Athens coach Jack Young tipped his cap to Waverly after the game.

"Give a ton of credit to Waverly, they're a great bunch.

"(Waverly) never wavered," said Young. "They played like a team that had been there before. They have some cool characters on that team and some guys that just hung in there - both teams were ... tired in the fourth quarter.

"We had our chances, but we made a couple of big mistakes throughout the night that really hurt us," added Young. "Both teams made mistakes, but they capitalized more than we did."