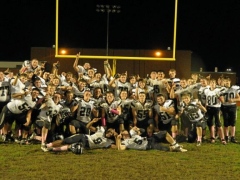 WYALUSING - The Athens Wildcats took home their first NTL title since 2008 Friday night at Peterson Stadium, as they defeated the Wyalusing Rams, 49-6. Jack Young, head coach of the Wildcats, commented, "We have a lot to be proud of. Our players need to enjoy this, because you only get to play high school football once. The older guys know that we have more goals to reach, but we will start working on those Monday."

The Rams opened with their first drive, which ended in a Tyler Fenton 53 yard punt. Athens would then gain possession, and a five yard run from Tyler Birdsall would set them up at their own 26 yard line. Birdsall again received the ball, racing 74 yards for their first touchdown of the night with 7:29 left to play in the first quarter. Kicker Troy Stivason's PAT was true, and Athens took the lead, 7-0. A Tim Ace run stopped short by sophomore defender Zane Vargason brought Wyalusing to their own 29. Another punt from Fenton gave the ball right back to Athens on their own 48 yard line. On the seventh play of the drive, a Stivason pass to receiver Garrett Clark was fumbled, the ball being ripped from the arms of Clark.

Wyalusing would then start the second quarter with yet another punt from kicker Tyler Fenton, handing to ball over to the Wildcats at their own 32 yard line. Seven plays later, Tyler Birdsall ran four yards down the right side for his second touchdown on the night. Stivason's PAT was blocked, and Athens' lead was now 13-0 with 6:42 left to play in the first half. A false start and a few lost yards set the Rams up at the Athens 48. Quarterback Andrew Pickett's pass was intercepted by Austin Depew, who then proceeded to race down the right side line 60 yards for the score. Troy Stivason's PAT was good, and Athens lead was extended, 20-0 with 4:39 left to play in the second quarter.

The first play of Wyalusing's next drive was stopped once again by a tackle from Vargason. On fourth and thirty on their own five, Wyalusing gave up another two points to the Wildcats for a safety, who now led 22-0. Five plays later, Birdsall would run twelve yards for his third touchdown on the night, making the score 29-0. And with that, the final score was set and both teams headed into the locker room at the half.

The Wildcats' first drive of the second half put an addition to the points already on the board. On first and ten, Mike Estes ran it in for the score with 11:01 left in the third quarter. Stivason's PAT was wide right, and Athens still held their lead, 35-0. A facemask on Athens gave Wyalusing an advantage, setting them up at their own 24. Two Pickett incompletions later, senior Ray McDougan returned Tyler Fenton's punt 60 yards for the touchdown with 5:55 left as he zigzagged his way through the defense; the Wildcats now led 42-0. Wyalusing gained the ball once again, and four plays later, Pickett threw his first interception of the night to senior Casey Clark, who raced thirty yards in for the touchdown with 3:43 left in the third quarter.

The Rams would start off the fourth with their first touchdown of the night. On third and two, Jake Minturn ran in for the score with 11:18 left in the game. The extra point was wide right, and the final score was set, 49-6.

Birdsall led all rushers with 151 yards on 13 carries and three touchdowns, while Troy Stivason threw for 123 yards on six completions. Luke Jennings led Wyalusing with 42 yards on four carries. Next week, Athens travels to Central Mountain while Wyalusing travels to Warrior Run.