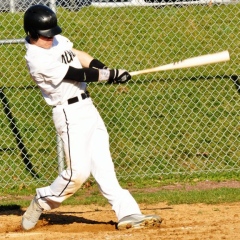 Troy Stivason went 2-for-3 with a run scored while Nick Vosburg went 2-for-2 with two runs scored to lead Athens at the plate.

Vargason got the win, striking out five while walking three and allowing one hit.

"Our defense, which is our strongest part of the team, had a bad inning," Waverly coach Kyle McDuffee said. "We need to find that switch to take it up a notch in a close game."

With the game tied at one Waverly had a chance in the sixth inning to go ahead.

"We needed a big hit in the bottom of the sixth with less than two outs and a runner on second," McDuffee said. "We didn't get it."

Patrick Bronson was strong in the loss, going 7 1/3-innings to strike out eight while allowing eight hits, four walks and two earned runs.

At the plate Anthony Girolamo went 2-for-3 for Waverly with a run scored while Cody marchese and Bronson had the other two hits. Brandon Michaud got the win for Edison, going eight innings and allowing four hits with three strikeouts.

"Both Bronson and Michaud did an excellent job," McDuffee said. "It was a good game to watch."

The Redskins picked up an NTL East baseball win Monday.

Troy scored two in the first inning off three walks and one hit while Sayre came back to take the lead scoring one in the 3rd inning, and two more in the top of the fifth.

In the top of the 8th Sayre scored 2-runs on two hits and a couple walks to take the lead. Troy led off the bottom half of the inning with two hits but couldn't answer.

Nick Skerpon started for Sayre going 5-innings with 5-runs allowed on three hits, seven walks and three strikeouts. Kyle Lake came on in relief to get the win with 3-innings pitched. He allowed 2-runs on three hits followed by Derrik Keir with the save behind two strikeouts to end the game.

Skerpon was 3-for-4 with four runs scored, David Mendola had two hits with a double and a run scored and Jake Wheeler had two hits and two runs scored. Also getting a hit was Cuyler Kochin, with Lake scoring a run along with Kochin.

For the Trojans on the mound Kyle Jackson pitched 6-plus innings with six runs allowed on five hits, eight walks and four strikeouts, Nathan Swain came on in relief in the 7th and started the 8th allowing three runs on two hits, two walks and one strikeout. Ryan Reeves closed the 8th with a hit, a walk and a strikeout.

Troy will travel to Athens on Wednesday.

Emmett Watson (2-for-2) and Wes Moore (2-for-3) led the Warriors at the plate with Watson adding two runs and an RBI. Moore also had two runs with an RBI.

Pepper, Wesneski and Machmer also drove in a run.

Wesneski got the win, going 3-innings to strike out two while walking one. Jacob Barrett and Pepper also saw action with Pepper striking out two.

Taylor Hillson had two hits to lead Mansfield along with a run scored. Derrick Burd, Jarrod Burd, Bo Burleigh and Brady Andrews also had hits. Jarrod Burd and Andrews scored for the Tigers.

Hillson, Bryce Zaparzynski and Andrews pitched for Mansfield and combined for eight walks and two strikeouts.

The Hornets jumped out to an 8-0 lead after the first two innings to pick up an NTL West win Monday.

Williamson cut it to 8-3 after the third but four more runs in the fifth by Wellsboro secured the victory.

Dawson Prough was 1-for-1 with three runs while Nate Harding was 1-for-4 with 3-RBI.

Logan Everett went 2-for-4 with a run scored to lead Williamson while Chris Colegrove was 1-for-2 with two runs scored.

The Crusaders picked up an IAC baseball win Monday.

Aaron Carson (3-for-3), Hunter Thomas (2-for-4) and Derek Marshall (2-for-2) led Notre Dame at the plate. Carson's included a triple with three runs scored while Thomas scored twice and Marshall scored once with 2-RBI.

Joe Prunier and Wyatt Martin also had hits, with Martin's a double. Prunier scored once while Martin had 2-RBI.

Tyler Boyles, Parker May, Kyle Metzger and Sam Bruner all scored for Notre Dame, Boyles also had an RBI.

Thomas scored the win, striking eight in five innings while allowing two hits and three walks. May went the final two with two strikeouts and one hit.

Jeremiah Wornifont went 1-for-2 with a triple and RBI to lead Newfield while Micky Beach scores the loss.

Down 3-0 an Adam Layman 2-RBI single in the top of the fourth opened the flood gates for the Tigers. They would go on to score seven runs in that inning as they picked up an IAC win Monday.

Layman (2-for-4), Ryan Vergason (2-for-5) and Carter Jackson (2-for-4) led Tioga at the plate. Layman had two runs scored as well, Vergason scored once with 2-RBI while Jackson also crossed home.

Howland and Moyer also knocked in one run each.

Simmons got the win, going five innings to strike out three while allowing four walks, six hits and one earned runs. Manuel struck out two in the final two innings.

Jesse Tillotson was the losing pitcher.

Tioga will travel to Odessa-Montour today.