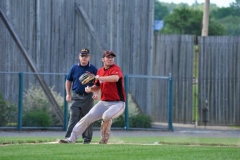 WILLIAMSPORT - All week long the Canton Warriors worked over and over again on hitting the curve ball.

It's something the Warriors had struggled with in the past and something they expected to see as the PIAA baseball playoffs began on Monday afternoon.

Each time Canton watched the Lancaster County Christian pitcher's big looping curveball they started to realize all that work was paying off.

After scoring four runs in the first two innings and chasing the starter before the second inning was over the Warriors rolled to an 8-1 victory on Monday for their first ever state playoff victory.

"We have been working on hitting the curveball a lot," Canton's Emmett Watson said. "That kid had a nice loop on his curve and it was easy to pick it up."

Canton coach Bob Rockwell knew that it was something his team was going to have to work on if they wanted to have success at the state level.

"We have been practicing that a lot," Rockwell said. "We know at some point we will go up against someone with a very good deuce (curve) and we have been starting to hit the curve a lot better."

Canton was able to pound out 12 hits in the game, including four in those first two innings as they got the victory.

The first inning started with a walk to Watson and Trevor Route reached on an error. Connor Route delivered an RBI single and after a fielder's choice and a fly out, Josiah Bardo had an RBI single.

In the second Tanner Machmer was hit by a pitch with one out and Watson reached on an error and Route reached on a fielder's choice before Route and Garrett Wesneski each had RBI singles.

Along with hitting the curveball early the Warriors also capitalized on four Lancaster County errors in the first two innings.

"We noticed they were a little shaky," Watson said. "We tried to move our runners and take advantage of that."

Staked to a quick lead Chase Pepper kept LCC in check, allowing five hits in five innings, hitting one and walking one, while striking out seven.

"It felt very good," Pepper said of pitching with an early lead. "We were playing with a lot of emotion."

"It's always nice to do that, get some breathing room" Rockwell said of the early lead.

Playing in their first state game getting the lead early also helped relieve some of the nerves for Canton.

"To be in the state playoffs for the first time, it helped you relax and get comfortable," Watson said. "It's always nice to start out on top and jump right out on a team at the start."

While Lancaster County was able to hit the ball, Pepper was able to pitch out of situations to keep them off the board.

"I was able to pitch around a lot of it," Pepper said.

"Chase made some big pitches," Rockwell said. "He got in a couple little jams, but he made good pitches to get out of them."

In the first inning with two outs LCC got two on, but Pepper got the strikeout to end the threat and in the second he pitched around a one-out single.

In the third Lancaster County had two on with one out, but back-to-back strikeouts ended that threat.

In the fourth inning Lancaster County got a one-out double, but a 5-3-5 double play got them out of the jam.

John Bowman pitched the sixth inning, allowing a hit and a pair of walks, but three strikeouts, inluding the final one where he battled back from a 3-0 count to end the inning, ended the threat.

Lancaster County's lone run came off Wesneski in the seventh. Wesneski allowed a walk and a triple and struck out two in the inning of work.

As the game went on Canton noticed something Lancaster County was doing at the plate and they were able to make an adjustment.

"We noticed they were first pitch swinging every time," Rockwell said. "We were able to adjust and they swung at some not-so-good pitches."

For Pepper it was nice that the big lead allowed him to leave the game after five innings.

"It felt pretty good to be able to rest up," Pepper said.

Up 4-0 Canton added to the lead in the fourth as Tanner Machmer singled and Watson followed with a single. A sacrifice by Trevor Route advanced the runners and Connor Route followed with a two-run double, before Wesneski added a single and Kyle Landis came up with an RBI single.

Route finished the day with three hits, two runs scored and four RBI, but the hardest ball he hit on the day might have been his one out as he lined a scorcher to third that was caught in the sixth inning.

"Baseball is a funny game," Route said. "Wes Moore hit the ball really hard all three (four) times and he doesn't get a hit. I don't hit the ball as hard and get four RBI."

For Route it was nice to see the Canton offense scoring so many runs in a state game.

"It felt amazing," he said. "We played hard and hit the ball hard."

Canton added a run in the fifth when Pepper walked stole a base and advanced on a passed ball and scored on a Machmer single.

Route and Wesneski led the Canton attack with three hits each, while Machmer had two hits in the game.

Watson, Landis, Bardo and Trevor Route all added hits in the victory.

For Watson and Canton's other seniors the win means keeping their career going a little bit longer.

"That is always on my mind every time I play that it could be my last game," Watson said. "I have played with these guys my entire life and there is nothing more fun then playing baseball with these guys. I don't want it to end."

Canton advances to the PIAA quarterfinals on Thursday at a site and time to be determined against the winner of District 1 champion Calvary Christian and GAMP, a game that was postponed until today at 3 p.m. at Temple University.