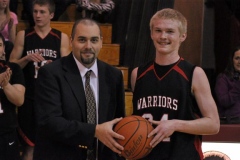 TROY - As the Canton Warriors took the floor at Troy on Wednesday, the idea of scoring his 1,000th career point was in the back of Emmett Watson's mind.

That quickly changed as Troy took a 12-2 lead in the first quarter and needing 13 points for the milestone started to fade from Watson's mind as he had to focus on trying to help the Warriors get the victory.

After a scoreless first half, Watson had 15 in the second half to help lead Canton to a 54-47 victory and allow himself to become the sixth 1,000-point scorer in Warriors history.

"It got to halftime and the game had seemed to go by so fast in the first half," Watson said. "I remember thinking there was time and next thing you know it's halftime. We only had a three point lead at halftime and we just had to worry about trying to win. I knew it was going to be a close game."

Along with worrying about trying to come back from an early deficit, Watson found that Troy's defense was working to try and slow him down.

"The whole game I got down in the post and they would double team me and I would kick it back out," Watson said.

After a scoreless first half he had five in the third quarter.

Midway through the fourth quarter Watson was still suck on five points, until he hit a three, then another three.

"I knocked one or two down and then I started to feel good," Watson said.

The second three left Watson just two points away from 1,000 and with 2:03 left in the game he got the milestone, driving into the Troy defense and hitting a fadeaway to become the first Canton player since 1996 to join the 1,000-point club.

For Watson the milestone was on his mind throughout the night.

"It feels really good, it's hard, I was thinking about it in the back of my mind during the game."

As Watson made the basket to put Canton up 50-44, he didn't have much time to celebrate as Troy's Jed Wright took the inbounds and raced down the court to score and cut the deficit to four.

"I got the milestone, the fans are going crazy and everyone is forgetting that Jed Wright is driving down the court for two points," Watson said.

After Wright's basket Troy coach Bob Woodward called a timeout to stop the game and give Canton a chance to recognize Watson.

Woodward himself knows how big of an achievement it is at Canton to score 1,000 points, as he is the second all-time leading scorer for the Warriors with 1,095 points.

"I can't express enough how classy a move it was by coach Woodward to call a timeout after Emmett recorded his 1,000th point in order for us to recognize his great accomplishment," Canton coach Lance Larcom said. "This is a huge milestone for our program and Emmett earned every one of those points."

For Watson getting the win against a rival like troy in a victory is a big deal.

"I had 24 points to go going into the Towanda game, and I know it wasn't impossible I have gotten 24 points before, but I really liked getting it against Troy," Watson said. "More of my friends could come because it's close to home and they got a couple milestones against us in the past."

While it was 17 years between 1,000 point scorers for Canton, the next one should come very soon as Eddie Larcom is now 22 away after scoring three points on Wednesday.

While it was a milestone night for Watsons, it was Wes and Mason Moore who helped keep Canton in the game early.

Mason Moore had 11 points in the second quarter, including three threes, as Canton outscored Troy 17-10 in the quarter to take a three-point halftime lead.

Wes Moore scored at least four points in each of the first three quarters and finished with 16 points to lead Canton.

Tim Bassett added six for the WArriors in the victory.

Jed Wright led Troy with a game-high 23 points and Chad Cole had seven for Troy.

Ryan Reeves and Brandon Mattocks had five each for Troy and Evan Polly had four points.