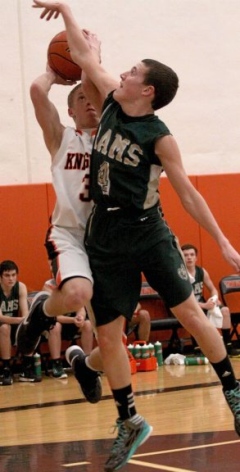 Towanda used a 46-17 second half to pull away from the win.

Towanda won the JV game 49-31 behind 16 from Nick Innocenzo. Ridge Williams had seven points to lead the Rams.

The Knights travel to Troy on Friday. A win at the Commons Building will give them the NTL East title.

Troy led 14-12 after the first quarter but the Hornets rallied to take a one point lead at the half, 29-28.

To start the second half Wellsboro scored 20 points in the third while holding the Trojans to six. Troy came back in the fourth, scoring 17 points of their own, but the Hornets added 18 in the quarter to secure the win.

With the win Wellsboro improves to 20-1 and continues to hold tight to the top seed in the Class AA standings. Troy falls to 9-12 and out of playoff contention.

Mattocks left halfway through the game with an injury.

The Trojans will host Towanda on Friday.

Troy Adriance and Hunter Huyett combined for 39 points as the Warriors qualified for districts with their NTL West win Wednesday.

Adriance led all scorers with 21 points while Huyett added 18. Shea Daley netted eight, Dalton Confer and Josh Bradbury had two points each and Canyon Black rounded out the scoring with one.

Dayton Wood and Cody Crum had 13 points each to lead the Panthers. Dylan Rudinski and Andrew Craig had three points each while Brad Brubaker netted one.

The Warriors will travel to Wyalusing Friday for their season finale.

With the win Williamson improves to 11-10 and has qualified for District IV, Class AA play.

Nate Williams scored 11 of his 23 points in the fourth quarter as the Redskins held on for the NTL East boys' basketball win Wednesday.

Sayre led 29-22 at the half but a 13-7 third quarter in favor of Canton cut that lead to 36-35 going into the fourth quarter. A 23 point final frame by the Redskins secured the win for them.

After Williams the next highest Sayre scorer was Adam Wampole with 10 while Jeremy Kyc added eight. They both had five boards.

Sayre wraps up the regular season with a 13-9 record and awaits to see who they'll play in the first round of districts, possibly either Muncy or Lourdes.

Canton falls to 13-8 on the year with their final game of the regular season at Athens on Friday.

The Wildcats are now 16-5, second in the District IV, Class AAA standings. They will host Canton Friday and it will be Parents Night and Senior Night for the Wildcats.

A last second shot by the Mountaineers to tie rimmed out and the Indians pulled out an NTL West boys' basketball win Wednesday.

CV led 28-24 at the half but an 18 point third in favor of Liberty knotted the game at 52-all going into the final quarter.

In the fourth the Indians were able to out score them 18-15 for the win.

"It was an excellent game by both teams, highly competitive and a great game to coach and watch," Liberty coach Brian Litzelman said. "CV hit shots and foul shots when they needed to for the win."

Josh Nudd had a season high 31 points to lead the Indians while Brandon Whitesell added 11. Bryant Painter scored seven, Tyler Melko added six, Todd Bonham and Dakota Corwin scored two each while Luke Plumber had one to round out the CV scoring.

Spring also had a double-double with 10 boards while Fritz nabbed seven rebounds.