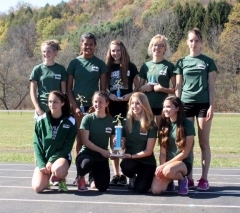 LERAYSVILLE - The Mansfield Tigers captured their first NTL title in three decades this season, but as the postseason got started on Saturday they found themselves in a tight race with defending district champion Wellsboro.

The Green Hornets and the Tigers each finished with team scores of 52 on Saturday, with Wellsboro winning by virtue of the fifth runner.

Wellsboro's Jada Jackson was fourth in the race in 20:39 and she is happy with the way the Green Hornets ran on Saturday.

"I'm very happy with my team and how we are running," she said.

While Wellsboro wasn't able to come out on top during the regular season this year, Jackson is hoping that her team will be able to compete at districts.

"It's going to be tough, but I think we have a chance to win and get back to states," she said. "I am hoping to get their (to states) as an individual, but I'm really hoping we can go as a team."

While her finish wasn't the best for Jackson she thought it was a good day.

"I felt okay about it," she said. "It was not the greatest, but it was good."

Mansfield's Violet Learn won the race Saturday with a time of 19:43. While Learn has been a district champion and state medalist, she had never won the NTL race before.

"It feels great, but it's just one along the way," Learn said. "It's just another race."

While Mansfield didn't get the win on Saturday, they know the race was big for some of their younger runners.

The Tigers were missing Erin Dempsey on Saturday and it was the first big invite for Chelsea Repard, who also plays soccer and has had games during other invites.

"It was really important for them to get this experience," Learn said. "You need to shock their system a little bit and get them used to this."

"Chelsea was tired, she had a soccer game last night, but we wanted her to get this experience," Lichty said.

Towanda's Katelin Purdy finished second on Saturday in 19:54, while her teammate Victoria Ackley was sixth in 21:05 as the Black Knights finished third as a team with 86 points.

"I think we ran really, really good," Purdy said of the team.

At the start on Saturday Purdy was worried about the fast pace of the race.

Both Towanda runners were together early in the race and they know that helped to push them.

"It's nice to have someone to run with, especially with Destiny (Foster) gone this year," Purdy said.

Northeast Bradford's Lydia Werner was fifth on Saturday in 20:51 as the Panthers finished fourth as a team with 93 points.

"Today was just an off day," Werner said.

While it wasn't the performance Werner wanted she is hoping she can run well at districts in a little less than two weeks.

"I feel good about districts," she said. "I hope I can do better. I only can do as good as I can."

For all the runners the pace at the start on Saturday was fast, but they were able to adjust as things went on.

"I just tried to do my best and do what I could do," Lichty said.

"Every race is different, you just have to go out there and run your race," Learn said.

"A lot of the girls went out fast today," Jackson said. "I just decided to run my race and not get caught up with that."

"I tried to go a little slower," Werner said. "I didn't want to go out too fast."

With districts coming up the runners hope that the success on Saturday can carry over.

"I hope so," Purdy said. "I didn't have my best race last year. I had a bad race in districts, I hope I can do good this year."

"I think I did pretty well," Beeman said.

"I think we worked together well," Porter said.

While the pace was a little fast for many of the runners the two Sayre teammates just tried to run together.

"I think we know each others pace," Porter said.

The two hope that Saturday was a sign of what is to come at districts.

"This race is good preparation for districts," Beeman said. "I hope we do good at districts."

Repard was 16th for Mansfield and Ayla Rohl was 23rd. Charlotte Worthington was Wellsboro's fifth runner in 19th. For Towanda's Ezozahan Ismailova was 21st, Kinsley Kriner was 28th and Isabella Sedor was 38th.

For the Panthers' Cassie Johnson was 22nd and Rachel Cooper took 30th, while Taylor Arnold was 33rd.

Pam Kelley was Wyalusing's top finisher in 17th in 22:31, while Morgan Sutton was 18th, Sarah LaFrance was 24th, Carlyn Edsell was 48th and Megan McClelland was 63rd.

Athens was fifth at 101, Wyalusing was sixth at 134 and Troy took seventh at 192. Sayre, Canton and Cowanesque Valley didn't have enough runners to get team scores.

Sayre's Grace McClelland was 36th and Kate Cron was 42nd.

For Canton Alexa Landis was the top finisher in 37th and Cassidy Bellows finished 43rd, while Rebecca Brown as 46th and Celena Hinkleman was 55th.

Paige Swartz was 35th for CV and Taylor Krusen finished 62nd for the Indians.