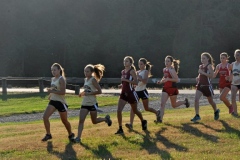 TROY - There were plenty of times the past couple of years where Mansfield's girls cross team entered a meet with not enough runners to compete as a team.

This year things have changed and after Tuesday's victories over NEB, Canton and Troy the Tigers are unbeaten in the NTL and closing in on the league title.

"We have never done anything like this as a team," Violet Learn added.

For Repard this season is all new to her as she is running varsity cross country for the first time, while also starting for the soccer team.

The sophomore has learned a lot from Learn and Lichty this year.

One thing that has made it easier for Repard doing two sports is having Erin Dempsey also do both sports.

"It's not very hard at all, everyone is making me comfortable," Repard said. "Erin helps me a lot."

All summer long Lichty and Learn worked to try and make sure Dempsey and Repard would run, giving them seven runners this year.

"We kept talking to them all summer to make sure they were going to do it," Learn said.

For the Tigers they know they are one meet away from winning an NTL title when there were years they weren't even competing as a team.

"It would be amazing," Learn said. "It's great to not just run for yourself, but to have a team to root for."

In the junior high race Karli Moyer of NEB broke the course record with a time of 10:12, while Troy's Courtney Case broke the school record in 10:18.

Troy edged NEB 26-33 and neither Canton or Mansfield had a full team.

The Green Hornets picked up a pair of NTL girls' cross-country wins Tuesday.

Lilly Houseknecht was fourth in 13:31 for the Griffins.

Tioga's Allison Schweiger finished fourth in 26:38, followed by teammates Madeline Hoover in 29:29 and Hannah Moore in 31:24.

In the modified race Tioga's Madeline Teribury was fourth in 14:30. Candor's Lillian Jensen won in 11:29.