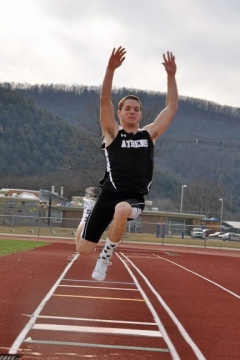 The Panthers swept the 1600 as Curt Jewett won in 4:40.5 followed by Sam Williams and Brandon Devonshire. Northeast's Colton Snyder won the 400 in 54.4 with Sayre's Adam Moore second and Panther Sam Beers third.

Sayre's Austin Willis edged teammate Juan Velazquez in the 300 hurdles by .1 with a time of 53.3 to win.

Zajac won the long jump in 20-feet, 2-inches followed by Marcos Velazquez and Kyle Post in second and third.

Juan Velazquez won the 110 hurdles in 21.1 followed by Willis with Northeast Bradford's Cole Beckwith in third.

McPherson won the 100 in 12.1 with Skerpon second and Jampo in third.

Canton's Will Unruh won the shot put in 43-feet with Troy's Christ Westerfer and Adam Watson second and third.

Troy's Shane Miller won the 1600 in 5:02 followed by Williams and Brennan Gleckner. Brendan Cohick won the pole vault in 9-feet.

Unruh won the discus in 143-feet followed by Troy's Layton Calkins and Watson. Binford won the triple ump in 38-feet, 1-inch followed by teammates Mike May and Whitehead in second and third. Larcom won the 400 in 53.3 with Westerfer and Troy's Trevor Hodge second and third.

Canton's team of May, Noah Barnett, Lattimer and Brian Jannone won in 47.7.

Calkins won the javelin in 112-feet, 2-inches followed by Canton's Max Brenchley and Quinn Abercrombie. Ellsworth won the 200 in 24.7 followed by Westerfer and Barnett.

Vanhoutte won the 3200 in 11:05 with teammate Zack Schonher second and Brooks Gleckner third.

ATHENS - The Wildcats picked up an NTL win Thursday.

Nick Pane won the 110 hurdles and 300 hurdles for the Wildcats while Ryan Krekenbohm won the discus and shot put.

No other results are available due to an error with Athens' scoring system.

The Panthers fell to the Mountaineers Thursday.

Dzuiba was also second in the shot put and third in the discus.