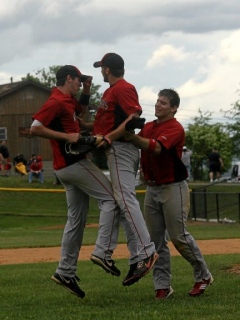 BLOOMSBURG - All season long pitching and hitting have been the staples for Canton baseball.

While on Tuesday their pitching continued to be strong their bats, outside of Connor Route, just weren't there. However, their gloves were.

Every time it looked like Old Forge would get some momentum Canton took it away with a defensive play. Two pick-offs at first, an inning ending double play, diving stops, leaping grabs, running catches and a reach back foul ball catch with the mask on by Canton catcher Jacob Butcher all worked to despirit a Blue Devil team that couldn't find any kinks in the Canton defense.

That, combined with Connor Route's timely hitting, gave the Warriors a 2-1 win over Old Forge and a berth into the PIAA, Class A baseball championship game.

All of it started in the first inning with pitcher Chase Pepper and first baseman catching Old Forge's Mike Viera snoozing at first base and picking him off.

"Perfect," was how Connor Route described the play. "Chase has a really good move. We've been playing for so long, we work really well together."

In the second inning Connor's brother Trevor Route made one of several tough ground ball put outs on the day for him and from their everything clicked for the Warriors on the field.

Also clicking through the first six innings was Pepper, who had a no hitter through five as he went on to get the win.

"My curveball was working really good today," he said. "And my fastball was hitting its location."

"He really pitched a good game," Butcher said. "It was just my job to block the pitches and get them out."

Old Forge didn't get their first hit until the sixth inning and weren't able to get on the scoreboard until the seventh.

That's when Pepper came out and Garrett Wesneski came in to shut the door. With the tying run on first and one out Wesneski got the next batter to fly out and struck out the final batter to get the save.

"I had a feeling if Chase got into any trough I would be going in," he said. "I like the pressure situations."

Wesneski finished with 2/3-innings of work with one strikeout on seven pitches.

Old Forge's David Chromey was equally tough, going all seven innings to strikeout eight while allowing five hits, one walk and two runs with just one earned on 92 pitches.

"He was really tough," Canton coach Bob Rockwell said. "He throws left handed and had three or four pitches with a lot of movement. I'm glad we have him behind us, he's a really tough kid."

But his defense wasn't nearly as resilient as the Blue Devils committed four errors to Canton's one. The Warriors also had eight steals on the day to Old Forge's none.

While Chromey allowed just five hits three of them came off the bat of Connor Route, who went 3-for-3 on the day with an RBI and a run scored.

Emmett Watson and Pepper had the other two hits.

The first couple innings belonged to the starters.

In the top of the first Chromey struck out 3-of-4 Canton batters he faced while in the bottom half of the inning Pepper struck out two.

In the second inning Wes Moore reached on an error then stole second and third with two outs to threaten but Chromey got out of the inning with a strikeout. Old Forge could only force a two out walk during their at bat in the bottom half of the inning.

It was the top of the third when the Warriors finally struck. With one out Emmett Watson reached on an error then immediately stole second. Two batters later Connor Route hit a single that drove in Watson to put Canton up 1-0.

"It set the tempo for the game," Connor Route said about the run.

It also helped Pepper out on the mound.

"It lifted a weight off my shoulders," he said. "It felt a lot better."

That showed as in the bottom half of the inning Pepper struck out the side to keep the no hitter going.

Both sides went down in order in the fourth while in the top of the fifth Watson reached on an infield single with two outs. However, Trevor Route grounded out to end the inning.

In the bottom half of the inning Robert Donovan reached on Canton's only error with two outs but was promptly picked off to end the inning.

During the top of the sixth Canton once again got going as a Connor Route fly ball was caught by the strong wind and blew over the centerfielder's head. He would get to second for the only extra base hit of the game.

Wesneski reached on an error by the shortstop putting runners on first and third with no outs. Wesneski would steal second to put two runners in scoring position.

However, the Blue Devil defense dug in as they moved in to protect home and got Kyle Landis to ground out without allowing a run.

That's when the Warriors went to their bag of tricks as Josiah Bardo laid down a bunt on a squeeze play that scored Connor Route, making it 2-0.

Wesneski still threatened at third but Chromey was able to get Moore to fly out to end the threat.

In the bottom half of the inning Old Forge finally broke through with a hit.

With one out pinch hitter Paul Papi hit a hard ground ball up the middle. Moore made a diving stop but Papi was able to run out the throw to first.

That infield hit was enough to give Old Forge some desperately needed momentum but it was short lived. Pepper got Viera to hit into a 1-6-3 double play to end the inning.

Canton looked to score in the top of the seventh as Pepper led off with a single then stole second followed by Tanner Machmer moving him over to third on a bunt.

Watson then hit a ground ball to the third baseman but Pepper was thrown out at home to keep it a 2-0 lead.

Watson then went for home but the third baseman's quick throw combined with a fast tag by the catcher caught Watson at home, ending the inning and preserving the 2-0 deficit.

It was in the seventh that Old Forge's offense finally showed signs of life as Matt Mancuso led off with a single. He would reach second on a ground out to Pepper on the next at bat followed by Derek Drasba bringing him in with a single into left field, cutting the lead to 2-1.

That's when Wesneski entered and got the final two outs.

Now Canton will play for a state title as they face District IX runner-up Johnsonburg who defeated California 8-1 in the other semi-final game Tuesday. They will play at 10:30 a.m. this Friday at Medlar Field at Lubrano Park, University Park at Penn State.

Being able to partake in this game is a goal Canton has had for some time.

Being able to play for their highest championship is something these players have dreamed for since they were kids.

"You always think about it but now you get to experience it first hand," Pepper said. "It feels great."

On Friday it will be Wesneski's turn to take the mound and he couldn't be happier about it. His last loss was in the District IV championship game last year against Montgomery but something that happened to him between then and now, something on the wrestling mat, may have changed him.

"A lot of parents and people said that after wrestling, when I lost that first match at states and came back to win the next, it did a lot of good for me," he explained.

He was able to get a state medal in wrestling, on Friday he'll be trying for a state championship.