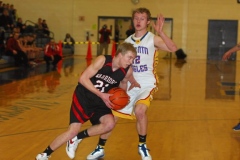 The Warriors out-scored Line Mountain 17-5 in that crucial quarter and went on to 52-37 to earn a date with top seed Wellsboro.

"I'm excited for the boys," Canton coach Lance Larcom said. "We've talked about making it to this point for a long time and to see how they embraced it just excited me as a coach. To see them enjoying themselves in a game, they didn't let the game get too big, but I know it meant a lot to them. I was very happy for them."

This is Canton's first playoff win since the 1970s.

Canton's three point stroke was working as usual, hitting seven as a team but it was their defense that won them the game. Only one Line Mountain player reached double figures in scoring as they were held to single digits in three of the four quarters.

"We were fortunate enough to see them on tape," explained Larcom. "We knew they had the capability of putting up some big points. Our focus of the first half was to shut down their two leading scorers. Eddie (Larcom) and Emmett (Watson) did a phenomenal job. Eddie held their leading scorer to 0 points, Emmet shut down their second leading scorer. It should have been a lot bigger lead but we missed some lay-ups."

Canton led off with a 12-7 lead after the first quarter as the Warriors saw five different players find the basket. In the second quarter Line Mountain rallied, out scoring Canton 13-10 to cut the deficit to 22-17 at the half.

Mason Moore had all his points in that second quarter, scoring six on two threes to help keep Canton a head

In the third quarter Canton's leading scorer Emmett Watson took over. He had 10 of Warrior's 17 points and pushed Canton's lead to 39-22 going into the final quarter.

Watson would finish with 21 points while Larcom added eight. Wes Moore added seven while Tim Bassett and Mason Moore scored six each. Jesse Lattimer added four to round out the Canton scoring.

Canton will now face Wellsboro on Friday at Mansfield University with a 7:30 p.m. start.

While Larcom doesn't know if facing a familiar foe gives them an advantage his team is excited about the match-up.

"Obviously its exciting for us that they're two teams from the NTL that get to the meet up in the second round of the playoffs," Larcom said. "It saves me having to go hunt down tape on them. I don't know how much of an advantage it is, but were happy we are familiar with them and at the same time they are familiar with us too."