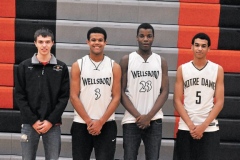 Having good guards is important to any high school basketball team and the three guards at the head of The Daily Review Boys' Basketball All-Region list are as good as they get.

Wellsboro swept through the NTL this season and were District IV, Class AA runners-up. Lead guard Jordan Jackson was a big reason for that with his leadership, defense, ball-handling skills and scoring, and that's why he's the Player of the Year.

Sullivan County was runners up in the District IV, Class A tournament and reached the second round of states with a defensive minded attitude. Four year starter and lead guard Kelby Mullen was key to his team's play this season.

Hit by the injury bug multiple times, Notre Dame turned to sophomore Darius Garvin and he responded. His offensive consistency kept the Crusaders make a run at the IAC and Section IV titles this season, making him the Offensive Player of the Year.

In the other major awards Wellsboro sophomore Kieron Smethers is the Rookie of the Year and Towanda coach Ryan Napp is the Coach of the Year.

Smethers became a force in the paint for the Hornets this season, the biggest difference between this year's team and last year's team.

Napp led a young Towanda team to the NTL East title this season.

Jackson, Mullen and Garvin are also on the All-Region First Team.

Clark, Williams and Watson were top flight scorers for their teams while Rodenhizer turned into a strong two-way player for the Knights. Bronson's inside-outside offense and rebounding ability were crucial to Waverly's success this season.

The Second Team is headlined by Mansfield's leading scorer Taylor Hillson and lead guards Noah Huff of Towanda and Eddie Larcom of Canton.

Also on the Second Team are big men Conner Wylie of Sullivan County, Luke Wright of Athens and Hunter Huyette of Williamson along with wing scorers Evan Polly of Troy and Nick Stanton of North Rome Christian School.

The All-Defensive team is headed by Mullen along with Wellsboro guard Matt Reese.