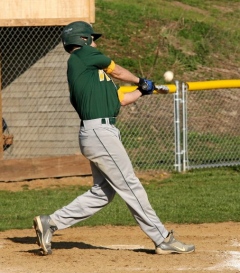 Andrew Pickett went 3-for-4 with two home runs, 4-RBI and four runs scored to lead the Rams while Chad Johnson (2-for-5) and Dylan Otis (2-for-4) also had multiple hits. Johnson scored twice while Otis had an RBI.

Isaac Bennett started and got the win, going two innings to strikeout one while allowing six hits, five runs and one walk. Carr pitched the next five, striking out four while allowing five hits and two earned runs.

Brandon Whitesell went 3-for-4 with two runs scored to lead the Indians while Luke Plummer (2-for-4), Tyler Melko (2-for-4) and Brandon McLean (2-for-3) also had multiple hits. Plummer and Melko also scored.

Whitesell started and gets the loss, going five innings with four strikeouts while allowing one walk and six earned runs. Melko went the final inning allowing one run.

The Panthers led 6-5 after the fourth inning when Canton rattled off 12 unanswered runs to pick up the NTL cross-over win Tuesday.

Kyle Landis went 3-for-3 with 3-RBI and a run scored to lead Canton while Emmett Watson (2-for-3), Tanner Machmer (2-for-5), Chase Pepper (2-for-4) and John Bowman (2-for-4) also had multiple hits on the day. Watson added a 2-run home run, four runs and 4-RBI, Pepper had a triple, two runs and 2-RBI, Bowman had three runs and an RBI and Machmer also knocked in a run.

Connor Route and Wes Moore also had hits. Route added two runs and an RBI while Moore scored a run and knocked one in.

Josiah Bardo scored a run for the Warriors.

Landis started going 2/3-inning of an inning followed by Route and Moore coming in. Pepper would eventually get the win.

Stroud started and went the first three innings while Clark pitched the next two and gets the loss.

Cody Marchese went 5-for-5 with a double, triple, 6-RBI and four runs scored as the Wolverines picked up an IAC baseball win Tuesday.

Dylan Perry went 3-for-6 with a double, 5-RBI and two runs while Matt McCabe (2-for-3), Alex Uhl (2-for-3) and Kyle Kuzma (2-for-2) all had multiple hit afternoons. McCabe's included a double, 3-RBI and a run scored, Uhl had two runs scored and 1-RBI and Kuzma scored twice with 1-RBI.

Girolamo added 2-RBI while Cooney also knocked in a run.

Miller went the distance for Waverly to get the win. He struck out two while allowing 13 hits, five earned runs and two walks.