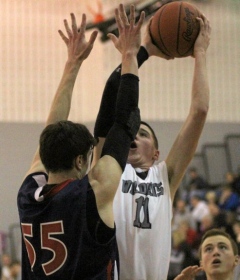 ATHENS - The Wildcats outscored Sayre 27-20 in the second half as they got their first win 42-36 over the Redskins on Monday.

Brandon Fauver led Athens with 19 points and Austin Lister had eight in the victory.

Tyler Forbes had six for Athens and Joe Moyer had four points, while Jarrett Priester had three and Daniel Joyce finished with two points.

Sayre got 12 points and three assists from Nick Sweet and Joey Galizia had 10 points and nine boards.

The Tigers got 19 points from Bo Burleigh as 10 players scored in the win.

Jarrod Burd had 14 for Mansfield and Bryce Zaparzysnki had 11 points.

Brock Burleigh and Dayton Wood each had nine ofr the Tigers and Konnor Manikoski had six, while Luke Kelly, Levi Christman and Nathan Tice had four points each.

Christman had three stalls and Correll had four steals, while Shane Kelly had six boards. Brock and Bo Burleigh each had nine boards and two assists and Luke Kelly had six rebounds.

Canton got 24 points from Mason Moore and 17 from Ridge Moore in the game.

Logan Route and Rusty Howard each had three for Canton and Trevor Route and Silas Binford had two points each.

Canton plays Williamson on Saturday in the Liberty Christmas Tournament and Mansfield is at the Josh Palmer Fund Tournament in Elmira on Saturday.

The Warriors got 21 points from Nick Cevette and 18 from Josh Bradbury in the win on Monday night.

Kyle Haight had 10 points and Brandon Schrader had six, while Colin Heilbrun finished with two points.

Wiliamson takes on Canton at the Liberty Tournament on Saturday.

The Tigers got 12 points from John Dougherty as they picked up the win Monday.

Nick Klossner had seven for the Tigers and Dylan Babcock had five, while Sam Burns, Parker Hendershot and Josh Kitchart all finished with two points.

Adam Zwerlein had three points for Tioga and Zach Hutchinson had two points.

Burns had eight boards and Kitchart had seven boards, while Hendershot had five boards, two steals and two assists.

Edison was led by Josh Cosgrove with 12.

Playing without leading scorer Ridge Williams, the Rams got within seven at 39-32, but Elk Lake closed the game on a 10-2 run to seal the win.

Terron Millard had nine for Wyalusing in the game and Kyle Tinna finished with seven points.

Matt Woodruff and Jon Morrison each had five for the Rams and Jordan Schools finished with four points, while Keshon Gardner and Collin Fassett had two points each.

Wyalusing won the JV game 45-39 with Devin Masters scoring 11 for the Rams.

Coudersport had eight players score as they defeated the Trojans on Monday.

Troy got 12 points from Jared Murray and Alex Butcher had 11 in the game.

Jah Wallace and Brandon Mattocks each had four for Troy and Anthony Detrick had two, while Jordan Nelson finished with one point.

Newfield jumped out to a 53-18 lead after three on their way to the victory Monday.

Jeff Mitchell had four for Waverly, Matt McFarland had two points and five boards and Austin Blauvelt had one point.

Dakari Stewart and Brian Barrett had 19 each for Newfield.

Newfield won the JV game 49-47 and Mads Lindhart had 17 points and 14 boards for Waverly.

Waverly hosts their Christmas Tournament starting on Dec. 26 when they host Spencer Van-Etten.