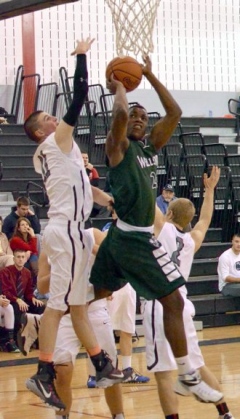 The North Penn-Mansfield Tigers got 24 points from Dayton Wood as they scored 21 points in the second, third and fourth quarters of a 76-67 win over Towanda on Thursday night.

The Tigers, who moved up to large school this year, led 55-41 after three quarters against the defending NTL large-school champs, before Towanda hit five threes in the fourth to give themselves a chance.

"I'm real excited with the win, there was great energy in the gym, tremendous fan support, the student section was as good, or better then it's ever been," Mansfield coach Kipper Burleigh said. "I'm really tickled to get this win against the defending NTL champs because Towanda's got a great team."

Wood hit three threes for Mansfield and had seven boards, three assists and two steals to go with his 24 points.

"It was a huge game for Dayton," Burleigh said. "It was a breakout game. He really shot the ball well and when he does, it really opens the game inside for us."

Noah Huff hit six threes on his way to 32 points for Towanda and Nick Place had 12 points in the loss.

Dylan Bates had nine for the Black Knights and Noah Wheeler finished with seven points.

Jarod Boardman had four points for Towanda and Bailey Potter had three, while Tristan James finished with one point.

Mansfield is at Canton on Monday and Towanda is at Montrose on Saturday with a 3:30 p.m. start.

ATHENS - Kieron Smethers scored 11 of his 19 points in the fourth quarter to lead the Green Hornets to the win on Thursday.

Leading 40-39 after three quarters, Wellsboro outscored Athens 16-9 in the final eight minutes to get the win.

Smethers had a double-double, adding 12 rebounds, and Michael Pietropola had 23 points and nine boards for the Green Hornets.

Dawson Prough had six points and Brandon Lamphier had four, while Jake Mitchell finished with three for Wellsboro.

Brandon Fauver had 17 to lead Athens and Austin Lister finished with 15.

Kalen Keathley had six for the Wildcats and Joe Moyer had five.

Tyler Forbes finished with three for Athens and Nick Vosburg had two points.

Nick Cevette had a double-double to lead the Warriors to the win on Thursday.

Cevette had 12 points and 10 rebounds and Josh Bradbury had 10 points in the win, while Kyle Haight had eight and Jon Daley finished with five points.

Sayre was led by Nick Sweet with seven points and Joey Galizia finished with six points and 10 boards.

Marshall Felt and Matt Williams had three each for Sayre and Marcos Velazquez finished with two points.

Jordan Rockwell had three assists for the Redskins.

Williamson is at Austin today.

For the second straight game Cowanesque Valley got a free throw in the final seconds to pick up the win.

Tyler Melko hit one of two with five seconds left for the Indians to get the victory. In the last game CV hit a free throw with 1.9 seconds left to beat Athens.

Melko had 19 to lead CV and Bryant Painter finished with 18.

Nate Bonham had six for the Indians and Dakota Corwin finished with five points.

Brandon McClean had three and Tyler Cline and Connor Calaman had two each for CV.

Garrett Bickhart and Darroll Carroll led Liberty with 15 each and Terry Clark finished with 14.

Logan McGovern and Sergey June each had four for Liberty and Dillon Ford finished with two.

The Rams had three players score in double figures as they picked up the road win on Thursday night.

Keshon Gardner had 14 to lead Wyalusing and Matt Woodruff had 13, while Jon Morrison finished with 12.

The Rams got six each from Terron Millard and Ridge Williams and Collin Fassett finished with five in the victory, while Hunter Brewer added two points.

Travis Butcher led Troy with 20 and Jah Wallace had 14.

Sean Mosher had three for the Trojans and Kurtiss Roupp had two, while Jared Murray finished with one point.

The Panthers won three games a year ago and they already matched that win total this year as they improved to 3-1 with the victory.

The Panthers jumped out to a 20-6 lead after one quarter on their way to the win.

Jordan Goodwin had 19 points and 15 rebounds for the Panthers and Garrett Smith had 11 points, along with three assists, while Elijah Arias had 10 points and seven boards.

Tommy Rought had eight points for NEB and Mike Williams had six points and three assists, while Nik Geiser had five points and David Ford had four points.

Mason Moore hit seven threes on his way to 29 points to lead Canton. Ridge Moore had 10 for the Warriors and Byron Matthews and Bruce Comereski had two each, while Matt Berryman finished with one point.

NEB is at Blue Ridge on Saturday.

The Griffins improved to 2-2 as Kaiti Beinlich and Sarah Parrish each had double-doubles in the win.

Ashley Faus had six for the Griffins and Tori Shultz had four points and seven steals.

Sadie Lewis had three for the Griffins and Kelly Kramer had two points.

The Griffins are at Bloomsburg on Saturday.

Latascia Shadle had 13 points as Galeton fell to a state-ranked team on Thursday.

Cortney Parsell had seven for Galeton and Ashley Cizek had six, while Kiersten Akers and Makaya Shadle had four points each in the game.