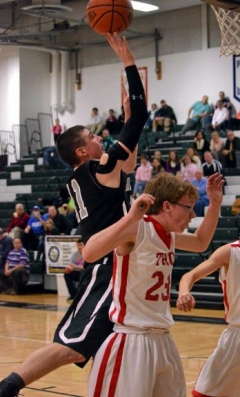 Towanda saw 10 different players score in their 72-37 win over Northwest during boys' basketball action at the Hughesville Showcase.

Towanda will face Hughesville at 8 p.m. today to finish the showcase.

The Spartans jumped out early and never looked back in their victory.

John Saxe had 13 points and five boards to lead the Griffins while Adam Szklanka added 12 points.

Jordan Beinlich had six points while Tom Choplick added four. Bobby Frank and Tyler Lovelady each had two while Jordan Pedro netted one.

In the JV contest Sullivan beat Hughesville 36-34 in overtime behind 14 points from Taylor Baldwin.

The Griffins used a strong fourth quarter to rally past the Lady Knights.

Towanda led 20-16 going into the final frame when Sullivan out scored them 16-4 to get the win.

Sarah Parrish had 12 points to lead the Griffins while Ashley Faus added 10. Kelly Kramer, Tori Shultz and Alexis Keiss each had four points to round out the Sullivan scoring.

Towanda will face Hughesville today at 6 p.m. while Sullivan County takes on Canton at 2 p.m.

ELMIRA, N.Y. - The Wildcats picked up a non-league win as Austin Lister out dueled Troy's Brandon Mattocks during the Josh Palmer Fund Monday.

Lister finished with 27 points and eight rebounds while Mattocks had 26 points. Both had 19 points at halftime.

After a low scoring third quarter, 8-6, in favor of Athens, both teams caught fire in the third but it was the Wildcats out scoring Troy 23-22.

Aaron Barry had two points to round out the Wildcat scoring.

Alex Butcher had 18 points and seven boards to give Mattocks some help on the Troy side while Jah Wallace added six points.

Clark Jackson had three, Jordan Nelson and Anthony Dietrick score two points each with Jared Murray rounding out the soring with one.

The Mountaineers used a strong defensive effort to pick up the boys' basketball win Monday.

"The team moved the ball really well on offense to get good shots in the first half," said NPL coach Brian Litzelman. "The defense played well not giving Canton too many open looks and had their hands in passing lanes throughout the game."

NPL jumped out to a 17-8 first quarter lead thanks to eight points from Darrell Carroll. They would get 18 more in the second quarter to take a 35-13 lead at the half.

In the second half the Warriors out scored NPL 21-17.

Mason Moore had 10 points to lead Canton while Byren Matthews and Ridge Moore had six points each. Trevor Route and Rusty Howard had five points a piece with August Gum scoring two.

Four different Wildcats scored in double figure as the they finished out their holiday tournament play 2-0 in girls' basketball action Monday.

Jensen Dunkling led Athens with 14 points while Breana Gambrell and Shanell Baglini had 11 points each. Danielle Dougherty chipped in with 10 while Morgan Westbrook scored seven.