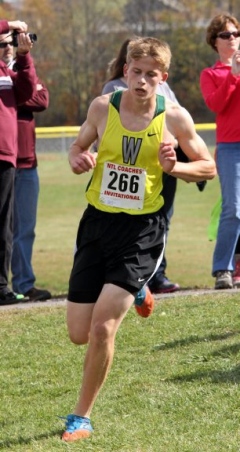 LERAYSVILLE - There were two dominating performances in the NTL Coaches' Invitational boys race on Saturday.

But it was the Panthers packing it in in the front, taking two through five en route to 27 places, 61 less than second place Wyalusing, who had 88.

"I felt solid," said Smith. "Coming in my times have just been dropping more and more and each race I've just been feeling better."

The senior was happy to finish out his last NTL season strong.

"I've been doing it in the dual meets and it's a good sign going into districts and into states," Smith said.

Upham had a strong second half of the race to pull away for second place.

"I felt pretty good for the first mile, I was pretty loose but I wasn't feeling it yet," he said. "About a mile and a half I started trying to pick it up and I started feeling it a little bit. Going up that hill I just made myself tough it out and I just kept it up, try to just surge against myself."

Teamwise the Panthers were impressive 1-through-4 as they were only seperated by 42 seconds with Garret Smith taking third in (17:14) while Derek Allabaugh and Austin Senn-Bishop were third and fourth in 17:31. Freshman Nate Mosier (18:12) and senior Ben Horton (18:13) were 13th and 14th for the Panthers as well.

"We did alright," said Upham. "Two through four is great. Our fifth man is coming right along, we've got a good little pack in there but we need that fifth man to come on up and he's working, he's really getting there. So it's great."

"I feel strong," said Gleckner. "I started out the season not looking too great but I think I'm starting to be stronger now."

The senior showed off a strong kick for the last 100 meters.

"That felt great," he said. "Those two kids have been beating me all year and I wanted to see if I can beat them this time, pull out something."

Herbst was happy with how he ran, running well the back half of the race.

"The first part I was a little bit tired," he said. "But I warmed up the second half."

The junior felt his strong finish was a good sign.

"It does feel good to finish like that," he said. "Putting a lot out there."

Beard ran with the front pack most of the race.

Schools led a tight pack for the second place Rams as they were only a 1:26 between one to five.

The Wildcats were fifth with 131 places.

The Panthers won the junior high title with 19 points.

Look for these same runners to make noise at the District IV Championships in two weeks.

Class AA Smith will be defending his title.

Smith has high expectations this year as he's peaking at the right time.

"Last year I PRed early in the season and never hit that time again," he explained. "This year it's been easy, small drops every single race."

In Class AA this year only one team and five individuals make it to states so Herbst has a pretty big mountain to climb if he is to reach Hershey.

"I think I want to finish low 17:00s," he said. "We ran a Bloomsburg meet there before I think if I finish low 1700s that will put me close to states. I don't know if I will make states."

Herbst plans on working right up until the end for one of those five spots.

"I think we might do a couple more hard workouts going up, then there's one more meet and the rest is just taper so I'm fresh for districts," he remarked.

In Class A Gleckner is hoping to get that state spot he just missed last season.

"I will add up the mileage," he said. "Work on the hills since Bloomsburg is a pretty hilly course. Just add up the miles because I think that's pretty much the only thing that will help me now."

The senior optimistic about his chances of getting into the top 10.

"I think I can," he said. "You never know at districts because the competition is always pretty stiff but I think I have a good shot. I'm just going to give it everything I've got."

Troy is down in Class A this year after being in AA the past two years. That will give Beard a better opportunity to make states.

"I think I've got a pretty good chance of making states," he said. "Especially in my second year that's pretty good."

Beard also plans on working hard these next two weeks.

"More miles and probably some more hill workouts so I can get up that hill easier and so I can sprint faster at the end," he said.

"I think that will get me top five," said Beard.

Teamwise the Panthers will be going for the 3-peat.

"I feel really good going into districts," said Upham. "(Coach) Murphy is a little worried about a team and we are too, you always have to be worried, you don't want to get too cocky. But we're looking good, feeling good and they changed it now with two teams go so we're praising God for that change."