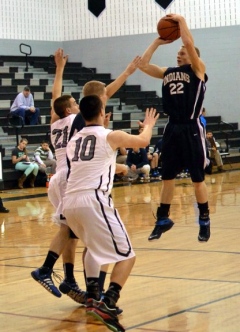 ATHENS - The Cowanesque Valley Indians rallied from an 11-point deficit entering the fourth quarter to defeat Athens 60-59 on Tuesday night.

The Indians hit 10-of-12 from the foul line in the fourth, including a free throw with 1.9 seconds left to seal the win.

Athens led CV 33-19 at the half and they led 49-38 entering the fourth quarter, but the Indians outscored the Wildcats 22-10 in the fourth to get the win.

Tyler Melko led the Indians with 22 points and Bryant Painter had 18 in the victory.

Nate Bonham had 11 for CV in the win and Dakota Corwin had six points.

Athens was led by Austin Lister with 20 points and Brandon Fauver finished with 12 points.

Joe Moyer had eight for Athens and Kalen Keathley finished with seven points.

Patrick Cole had four for Athens and Jarrett Priester had three points, while Daniel Joyce and Tyler Forbes had two each and Aaron Barry had one point.

Lister had a 20-20 game for the Wildcats, hauling in 21 rebounds to go with his 20 points. He also added three assists and three blocks, while Moyer had 13 rebounds.

Ridge Williams hit a three pointer at the buzzer to lead the Rams to the win on Tuesday night.

Wyalusing got a three from Kyle Tinna with a minute and a half left in the game to put the Rams up 37-35, but Marcos Velazquez tied the game with seven seconds left for the Redskins, setting up the big shot by Williams.

Williams and Tinna each had 11 to lead the Rams and Tinna and Keshon Gardner had eight boards, while Hunter Brewer had six rebounds.

Gardner had seven points and Jon Morrison had five points.

Brewer, Matt Woodruff and Collin Fassett each finished with two points for the Rams.

Marshall Felt led the Redskins with 13 points and Joey Galizia and Velazquez each had six points, while Matt Williams and Nick Sweet had four points each.

Nate Romanauski and Jordan Rockwell finished with two points each.

Wyalusing won the JV game 41-40. Jon Morrison led Wyalusing with 12 and Jalen Powers had 12 for Sayre.

Elijah Arias had 23 points to lead the Panthers to the win on Tuesday night.

Mason Merill had 10 for the Panthers and Tommy Rought finished with six points.

Jordan Goodwin had five in the win and Mike Williams finished with four points.

Nik Geiser had three for NEB and Austin Senn-Bishop, Garrett Smith and Nate Chilson all had two points.

With leading scorer Brandon Mattocks out, the Trojans got 21 from Alex Butcher in the game.

Jared Murray had 10 for Troy and Jordan Nelson finished with nine points.

Jah Wallace and Sean Mosher had four points each and Clark Jackson and Anthony Deitrick both finished with two points.

Butcher had eight boards and Murray had six boards and three assists, while Nelson had three blocks.

Notre Dame got a big game from Darius Garvin, and their shooters were hot in the win on Tuesday.

Garvin had 30 points, six boards, six assists and five steals, and he was 11-for-11 from the foul line, while Waverly was 14-for-15 as a team from the stripe.

"There are not many people that are going to take the ball away from him," Notre Dame coach Bill Hopkins said. "They tried to trap him and he found people. When you make threes, it makes things a lot easier. We doubled our shooting percentage and then some from our first game tonight."

After struggling shooting against Newfield the Crusaders hit 10 threes on Tuesday, with six players hitting threes and they shot 54% from the field.

"It's something I'm very proud of, it's not just one guy. It was pretty special to watch."

Hopkins knows the opener was pretty tough and was happy with the way they bounced back.

"Tonight we shot very well, the polar opposite of how we played Newfield," he said. "Nine of my 10 kids on the roster, that (Newfield) was their first varsity game, or their first time starting a varsity game."

Pat Brown had 12 for Notre Dame and Louis Clearwater had seven, while Derrick Stark finished with five points.

Joe Prunier had four points and seven boards and Parker May and Kyle Minchin each had three points.

Garrett Sutryk led Waverly with 18 and Peyton Miller and Hunter Bodine each had 11.

Zach VanHouten had five for Waverly and Alex Volpe had three points and Jeff Mitchell, Matt McFarland and Kyle Kinsley had two points each.

Kinsley and Sutryk each had five boards and Volpe had three steals, while Bodine added three assists.

Waverly hosts Watkins Glen on Friday and Notre Dame is at O-M today.

TOWANDA - Nick Place had 14 points as Towanda jumped out to a 20-5 lead after one quarter and rolled to the win.

Noah Wheeler had 11 for Towanda and Bailey Potter had 10, while Noah Huff finished with eight points.

Dylan Bates finished with five for the Black Knights and Tristan James had four points.

Place had six boards and Bates had three steals and two blocks, while Potter had four steals and Huff had six assists and two steals.

Williamson was led by Nick Cevette with 10 and Brandon Schrader had nine points.

Matt Dodson and Jon Daley had five points each and Josh Bradbury and Colin Heilbrun each had two points, while Jon Baker finished with one point.

Michael Pietropola had 30 points and Jake Mitchell had his first career double-double to lead the Green Hornets.

Mitchell finished with 11 points and 13 rebounds and Dawson Prough had seven, while Brandon Lamphier and Dalton Prough had six points each.

Nic Ingerick had three points and Collin Pietropola, Quinn Henry and Brieux Thibaut had two points each for the Green Hornets.

Pietropola had seven boards and Lamphier had four steals and four assists. Henry had three assists for Wellsboro.

Canton was led by Mason Moore with 22 points and Ridge Moore and Rusty Howard had three points each.

Levi Christman had 15 points as 10 players scored for Mansfield in the win.

Bo Burleigh had 10 points and Dayton Wood had nine, while Brock Burleigh and Shane Kelly each finished with eight points.

Luke Kelly had seven points and Konnor Manikoski had six points and Jarrod Burd had four points. Chandler Correll had three for Mansfield and Bryce Zaparzynski had two points in the win.

Liberty got 12 points from Garrett Bickhart and Darryl Carroll had 10 points, while Terry Clark finished with nine points.

Rylan Whitmeyer had three points and Dillon Ford and Logan McGovern had two each for Liberty.

Mansfield won the JV game 70-13 with Brock Burleigh and Shane Kelly scoring 12 each.

The Tigers got 18 points from Josh Kithcart and John Dougherty had 12 in the win.

Sam Burns finished with nine for Tioga and Nick Klossner had six, while Adam Zwierlein had four points.

Parker Hendershot and Dylan Babcock had two each.

Dougherty had 10 boards and Burns had 11 boards, while Babcock had seven rebounds. Burns had five steals in the game.

Wyatt Whitmore and Jordan Bartolis had 10 each to lead Candor.

The Griffins got 17 points and 12 rebounds from Adam Szklanka, but it wasn't enough on Tuesday night.

Miguel Rodriguez had 15 for the Griffins and John Saxe finished with six points.

Dereck Sellars had 18 to lead Muncy.

Sullivan won the JV game 33-31 with Taylor Baldwin scoring 12 for the Griffins.