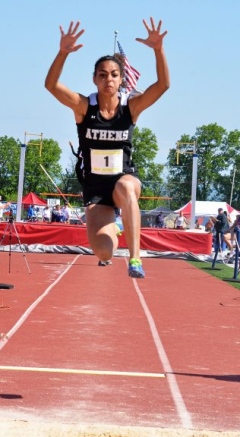 Four years ago Athens' Breana Gambrell watched as her brother Jarred stood atop the podium as a state champion.

At the time Gambrell was a fifth grader, watching her older brother claim a state title and break the state record in the triple jump.

At that moment Gambrell knew what she wanted to do one day.

"I remember his senior year seeing him and I wanted to come back in four years and do the same things he did."

Fast forward four years and just as she had hoped Gambrell was at states and just like her brother she finished the day standing atop the podium as she claimed the state title in the long jump with a school-record leap of 18-feet, 4-inches.

"It's great, I wasn't expecting to come down here and win an event this year," Gambrell said.

The freshman set the tone right from the start, landing her winning jump on her first try in the prelims.

"It was good, I was able to relax a little bit my later jumps," Gambrell said.

When Gambrell hit her jump she was immediately congratulated by another NTL jumper, Jada Jackson of Wellsboro, who took fourth in the event.

"It's so exciting," Jackson said. "Bre is great, she helps me with my marks. We have a great friendship, I was so excited for her."

After the event ended Gambrell was still shocked she had won a state title as a freshman.

"It definitely took a while to sink in, to realize I had just jumped 18-4," she said.

After her big jump Gambrell spent time watching all the other jumpers' distances, seeing if anyone would match her feat.

"It was nerve wracking looking at all the jumps, anticipating the next distance," she said.

It wasn't just a dominant day for Gambrell in the long jump as she and Jackson gave the NTL two state medalists, and Millville's Maci Bower (seventh) and Montoursville's Kirsten O'Malley (fifth) gave District 4 half of the eight state medals.

"It's definitely great, District 4 definitely cleaned up on the podium," Gambrell said.

After winning gold Gambrell's day wasn't over as she immediately rushed to the starting line to run her heat in the 100 meters.

"It's a little tough, I almost didn't make it there, but I held up and was able to make it through."

Gambrell entered states as the top seed in the 100 and her preliminary time of 12.35 was the best in the field, moving her on to today's semifinals.