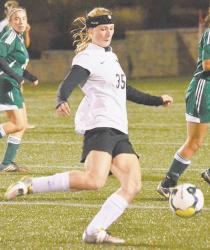 LOYALSOCK — For 93 minutes the Athens defense was a wall, turning away Lewisburg at every turn.

However, in the blink of an eye the season was over for the Wildcats.

One mis-hit by an Athens defender allowed Lewisburg to get off a cross that bounced to Nicole Cho for the goal with 1:18 left in overtime to lift the Green Dragons to the victory.

"Like I told the girls, sometimes all it takes is one mistake," Athens coach Tim Yale said.

Throughout the game the Lewisburg offense found one huge obstacle every time they tried to attack the Athens defense and that was sweeper Breana Gambrell, who turned in one of the best games of her career.

"Hands down, I agree with that," Yale said.

For Athens the defense held strong all game long.

"We have been working to strengthen our defense," Yale said.

Neither team was able to get many shots off as both defenses were up to the task on Monday.

"I'm more than proud of what our girls brought to the table today," Yale said. "When there are not a lot of chances, not a lot of balls will go in."

Athens had five shots and one corners in the game and Lewisburg had nine shots and four corner kicks.

While Morgan Westbrook didn't have to make many save, she had six, the ones she did make were big.

"She came up with some big saves," Yale said.

While the season is over the Wildcats are proud of what they accomplished this year.

"Absolutely, that's exactly what I told them," Yale said. "A loss at this level doesn't take away what we accomplished."

With a roster loaded with underclassmen the Wildcats will be likely be a threat in districts in the coming years.

"I'm simply excited for our prospects in the future," Yale said.