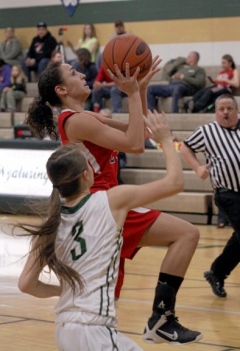 Back-to-back threes helped Sayre turn a five-point deficit into a one-point lead in the fourth quarter Thursday of a 45-43 win over Troy.

Down five midway through the fourth Allie Peet hit a three and Kaeli Sutryk followed with the three and Sayre controlled the boards in the final three minutes on their way to the win.

Sayre was led by Peet with 12 points and Sutryk had nine in the win.

Paige Wampole and Cheyanna Roberts each had eight for the Redskins and Chloe Tracy and Molly Ball had four points each.

"Another important win for us and our first large school victory," Sayre coach Eileen Sparduti said. "Tight finish and hard fought game. Another 'growth pain' for us as we are learning to play and win close contests. Some good inside rebounding late from Paige Wampole and Molly Ball helped to secure important possessions."

Tracy had five boards, three steals and two assists and Sutryk had four boards, while Peet had two assists.

Troy was led by Kelsey Bristol with 15 points and Faith Ceely had 13 points.

Taylor Johnston had six points for Troy and Brooke Mattocks had five points, while Carla Proto had four points.

Bristol had a double-double with 11 boards and added three steals and four assists.

Ceely had six steals and four assists and Mattocks had six rebounds, two steals and three assists, while Johnston had five boards.

TOWANDA - The Indians held Towanda to six first-half points and outscored the Black Knights 6-2 in the third quarter to get the win.

"We didn't turn the ball over that much, we really cut down on our turnovers and we played great defense," Cowanesque Valley coach Chris Tibbits said. "We still struggled shooting, but the kids played really hard, I'll take it. They are making progress."

Paige Swartz, Becky Plummer, Morgan Cady and Whitney Earl all had four points for CV and Maddy Huyler had two points, while Brynn Williams had one point.

Towanda was led by Alliesha Koss with four points and Kayla Grimes and Ali Daum had three each.

Megan Paulish and Kendra Abrams each had two points for Towanda.

Towanda won the JV game 21-4. Paulish had 10 for Towanda and Nicole Hummel had four points for CV.

After leading by five at the half, and after three quarters, North Penn-Mansfield scored 23 fourth-quarter points to pull away for the win.

Ali Hillson led Mansfield with 22 points and Mariah Berguson had 11 in the win.

Alysa Davey-Bostic had eight points for Mansfield and Kaitlyn Garverick and Sara Wolbert had six points each, while Emilie Dinan added two points.

Wolbert and Garverick each had seven boards and Hillson had three assists, while Davey-Bostic and Garverick had two assists each, with two steals each.

Northeast Bradford was led by Lydia Werner with 19 points and Macy Wilks had nine in the game.

Maddy Johnson had six points for the Panthers and Kara Hallett had four points, while Anna Wheaton and Megan Brown added two points each.

WYALUSING - The Rams outscored Canton 31-11 in the first half of the win on Thursday.

Kasey DeVoir had 15 points and nine boards, with three steals, in the win and Roni Morrison had 10 points and five rebounds.

Ally DeVoir had nine points and five steals and Brooke Force had six points for the Rams.

Paighton Martin, Keon Copp, Madelyn Edsell and Sarah Bird all had two points for the Rams.

Canton was led by Emalie Marnotti with nine points and Maggy Machmer had six for the Warriors.

Abby Herman had four for Canton and Lizzy Tymeson had three points.

Wyalusing is at Liberty on Saturday.

The Wildcats outscored Liberty 20-6 in the first quarter on their way to the win Thursday.

Morgan Westbrook and Breana Gambrell each had 15 points for Athens and Jensen Dunkling had 13 in the win.

Shanell Baglini had six points for Athens and Kaitlyn Testen and Emily Lunger had four each, while Danielle Dougherty finished with three points.

Malorey Sponenberg had four points for Liberty and Erin Shaffer had three, while Alyssa Remley had two points.

Jordan Butters had 10 points and Janessa Davis had eight as the Green Hornets picked up the win Thursday.

Sarah Ingerick, Rachael Tuttle and Alexa Singer all had six for Wellsboro and Raisa Rogers and Jessica Grab had four points each.

Tuttle had 13 rebounds and three assists and Butters had six boards.

Ingerick had four boards and two steals and Singer and Wilson each had two assists, with Wilson grabbing three boards.

Brittany Boyce led Williamson with 18 points and Andrea Sheive had nine for the Warriors.

Makayla Butz and Danielle Cross each had three points for Williamson and Logan Wilson finished with one point.

Freshman Makaya Shadle had a career-high 25 points, but Galeton fell to Smethport on Thursday night.

Latascia Shadle had 10 points for Galeton and Laura Parsell had four, while Cortney Parsell had three points.