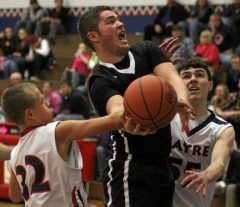 Brandon Schrader had 41 points, the most in the region this season, to lead Williamson to a 77-41 win over Troy on Wednesday night.

Kyle Haight had 12 points for the Warriors and Josh Bradbury had eight points and 10 assists.

Jon Daly and Collin Heilbrun had three points each.

Troy was led by Brandon Mattocks with 14 points and Kurtis Roupp finished with nine points.

Anthony Deitrick and Jah Wallace each had four points for Troy and Jared Murray and Clark Jackson finished with three points each.

Alex Butcher and Phil Dixon both had two points for Troy.

Troy won the JV game 54-46 with Heilbrun scoring 20 for Williamson.

Williamson is at Sayre on Friday.

SAYRE - The Athens boys came away with a 47-41 win over Sayre in an NTL matchup on Wednesday night.

Brandon Fauver led Athens with 17 points and Austin Lister had 16 for the Wildcats.

Jarrett Priester and Joe Moyer each had six points for Athens and Tyler Forbes finished with two points.

Matt Williams had seven for the Redskins and Marcos Velazquez and Joey Galizia had four points each, while Jordan Rockwell had two points.

North Penn-Mansfield outscored CV 34-21 in the first half on their way to the win on Wednesday night.

Bo Burleigh had 28 points to lead the Tigers, adding seven boards and two steals, and Dayton Wood had 17 points and four assists.

Cowanesque Valley was led by Bryant Painter with 20 and Tyler Melko had 14, while Dakota Corwin had 12 points.

Nate Bonham had four points for CV and Connor Calaman and Tyler Cline had two points each.

Bonham had four boards and three steals, with two assists, and Melko had nine boards, two steals and two blocks, while Corwin had three boards and a blocked shot.

Mansfield is at Towanda on Friday.

Towanda scored 24 first-quarter points and 40 points in the first half on their way to the win on Wednesday night.

Towanda pulled away in the third quarter, outscoring Canton 20-9 and holding the Warriors to 15 second-half points.

Noah Huff led Towanda with 19 points and Dylan Bates and Noah Wheeler had 10 points each.

Tristan James and Nick Place each had eight points for Towanda and Bailey Potter finished with seven points.

Mitchell Jenkins had four points for the Black Knights and Jarod Boardman finished with two points.

Huff and Wheeler each had six boards and Boardman had five rebounds.

Huff had four steals and two assists, Bates had two steals and Nick Innocenzo had three assists and three rebounds.

Canton was led by Ridge Moore with 16 points and Mason Moore finished with 12 points.

Trevor Route and Byron Matthews each had seven points for Canton and Matt Berryman finished with four points.

Canton won the JV game 43-41. Silas Binford had 18 for Canton and Matt McNeal had 12 and Shane Martin 11 for Towanda.

The Rams outscored the Panthers 16-7 in the first quarter and 19-10 in the fourth to get the win.

Keshon Gardner had 12 for the Rams and Ridge Williams finished with 11 points.

Terron Millard and Collin Fassett each had six points for Wyalusing and Kyle Tinna and Jon Morrison finished with three points each.

Jordan Goodwin led the Panthers with 16 points and 15 rebounds, along with three blocked shots and Mason Merrill had eight points.

Austin Senn-Bishop had three points and Tommy Rought and Mike Wallitsch had two points each.

NEB is at Canton on Friday.

The Green Hornets trailed 14-9 after one quarter, but outscored Liberty in each of the next three quarters to pick up the win.

Kieron Smethers led the Green Hornets with 20 points and Michael Pietropola had 19 points in the win.

Brandon Lamphier had nine points for Wellsboro and Jake Mitchell had three points, while Dawson Prough and Quinn Henry had two points each.

Darrell Carroll led Liberty with 14 points and Sergey June had 11 for North Penn-Liberty.

Terry Clark and Garrett Bickhart each had eight points for Liberty and Dillon Ford finished with four points.

June had 10 boards and Bickhart had eight rebounds, while Ford had three steals and Sean Upham had two assists.

"In a well played game by both teams Wellsboro used a 13-0 run in the second quarter to gain the lead at the half," Liberty coach Brian Litzelman said. "In the second half NPLHS actually fought back and retook the lead briefly only to have Wellsboro hit some clutch shots and crucial free throws in the final minutes to increase the lead, while NPLHS just could not get a shot to fall in the final minute to cut into the lead."

Wellsboro won the JV game 48-25. Jacob Singer had 12 for Wellsboro and Nic Ingerick and Henry had nine each.

Freedom Village jumped all over North Rome in the first period with the help of sharp-shooting Adam Vega on their side. Vega would hit four three-pointers in the opening frame and finish 9-11 from behind the arc which helped him have a game-high 31 points.

Falling behind 27-12 after one, NRCS had their work cut out for them but they did continue to work and with just under two minutes to play in the half, the Eagles cut the lead to 35-25. The third period would see the NRCS offense go cold and when the frame was over the deficit was 53-30.