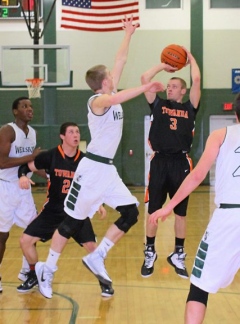 The Towanda Black Knights rallied from 14 down at the half to pick up a 42-39 win over Wellsboro in NTL boys' basketball action on Wednesday night.

The win helped Towanda move into a tie for second in the NTL large-school standings with Wellsboro, both teams a game behind Mansfield.

Wellsboro led 28-14 at the half, after outscoring Towanda 16-3 in the second quarter on Wednesday.

In the second half the Black Knights held Wellsboro to 11 points.

Noah Huff scored 15 of his 19 points in the second half and Noah Wheeler had 17 for the Black Knights.

Wellsboro was led by Kieron Smethers with 13 points and Michael Pietropola finished with nine points.

Prough had 11 boards and Smethers had eight boards, a steal and a blocked shot, while Pietropola had six boards and Mitchell grabbed five rebounds.

Towanda hosts Wyalusing on Friday and Wellsboro is at Mansfield.

The Indians moved even with Williamson in the NTL small-school standings and both teams are now a game back of Liberty.

Bryant Painter had 25 points to lead CV and Dakota Corwin finished with 10 points.

Tyler Melko had nine for CV and Brandon McLean finished with seven points.

Nate Bonham and Connor Calaman finished with two each for CV.

Williamson was led by Nick Cevette with 17 points and Josh Bradbury had nine.

Brandon Schrader had eight for Williamson and Kyle Haight had four, while Jon Baker finished with one point.

Joe Moyer finished with 10 as 10 Wildcats scored in the win.

Tyler Forbes had nine points and Kalen Keathley had eight for Athens, while Aaron Barry and Patrick Cole each had three points.

Jarett Priester and Daniel Joyce each had two for Athens and Bill Bennett finished with one point.

Hunter Brewer had six for the Rams and Keshon Gardener finished with five points.

Ridge Williams had four for Wyalusing and Collin Fasset had three, while Jordan Schools and Mitchell Schools each had two points.

The Tigers scored 23 first-quarter points and led 23-5 after one on their way to the win.

Bo Burleigh had 10 for Mansfield and Chandler Correll and Levi Christman had eight each.

Dayton Wood and Nathan Tice each had seven and Luke Kelly finished with six points.

Konnor Manikowski had three for Mansfield and Brock Burleigh and Shane Kelly finished with two points each.

Troy was led by Clark Jackson with 17 and Brandon Mattocks had 12.

Kurtis Roupp had nine for Troy and Jordan Nelson finished with four points.

Alex Butcher had three for the Trojans and Jared Murray, Jah Wallace and Anthony Deitrick had two each.

"NPLHS put together another solid defensive performance tonight, holding Canton to 28 points for the game," Liberty coach Brian Litzelman said. "NPLHS limited the number of easy looks Canton got at the basket, controlled the boards and got out and pushed the ball on offense. Then our big man, Sergey June, had his best game so far. He ended up with a double double, 23 points and 11 rebounds."

Along with the double-double from June, Liberty got 13 points from Terry Clark and six from Dillon Ford.

Drake Schmouder had four for Liberty and Sean Upham had three points.

Tyler Boyer, Brandon Patterson and Tyler Zeafla and Ethan Aldinger had two each for Liberty and Nathan Patterson had one point.

Zeafla had four boards and Ford had six boards, six assists and four steals, while Upham had two assists and two boards, with a block and a steal.

Mason Moore led Canton with 13 and Byron Matthews had 10 for the Warriors.

Auguste Gum had three for Canton and Ridge Moore finished with two points.

The Griffins got 19 points from Adam Szklanka on 4-of-7 from three and 7-of-11 from the field, but it wasn't enough in the loss.

Sullivan led 20-12 at the half, but were outscored 15-4 in the fourth as South rallied.

Jordan Beinlich and John Saxe had four each for the Griffins and Miguel Rodriguez and Bobby Frank each had two points.

Galeton closed to within a game of a spot in districts with the win.

Amanda Cizek had 10 for Galeton and Cortney Parsell had five, while Kaitlin Akers had four.

The Jr. Lady Wildcats head to Towanda on Monday with the A game starting at 6 p.m.