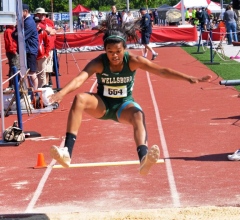 SHIPPENSBURG - When the season began Wellsboro's Jada Jackson wasn't thinking about the long jump at all.

After making states a year ago in the triple jump that's where the junior's focus was as she headed into the year.

However over the past month things changed as Jackson reached one personal best after another in the event.

On Friday all of that improvement paid off with a fourth-place finish at 17-feet, 5 ½-inches.

"It's amazing, I wasn't even thinking about the long jump two months ago and now to end the season with this," Jackson said. "This is really exciting to get fourth in the states. I just wanted to get a medal today, that was my goal."

Jackson landed her medal-winning jump on her first try in the prelims taking a few of the nerves away.

"My first jump to get that, it was huge," Jackson said.

It was a dominant day for the NTL, and District 4, in the event as Athens' Breana Gambrell won the title at 18-feet, 4-inches (see story) and Montoursville's Kirsten O'Malley was fifth (17-feet, 5-inches), while Maci Bower of Millville took seventh (17-feet, 1-inch).

"In the long jump every District 4 girl medaled, it's incredible," Jackson said.

"It could definitely have been better, but our handoffs were perfect," Rogers said. "It was a great time."

For Graver, running the third leg, the wind was really tough.

"There was no break from the wind on that curve," she said. "But, everyone had to deal with it."

While they didn't make the final the four Wellsboro girls had fun running together.

"It was a lot of fun just to be here," Jackson said. "We had a great time together one last time before Lauren graduates."

For Bleggi, the lone senior of the group, it was a fun final meet.

"I was calm before, which is different," she said. "Usually I'm nervous at states, but today I was much more calm. There is no one else I'd rather be here with. It's super special, it's why I wanted to get to states this year."

In the high jump Lunger tied for 12th at 5-feet.

For the freshman getting to Saturday in the 200 and 400 meters is special.

"It feels awesome," she said.

In the 400 meters Lunger was in a tight race the whole way and she just edged ahead at the end to win her heat and advance.

"It was close, I saw her coming on the inside and knew I had to stay with her and now I get to go to tomorrow, which is great," she said.

In the 200 meters Lunger did just what she had to do in order to advance.

"I didn't want to overdo it, I have three races tomorrow," she said.

In the high jump the event started at 4-feet, 10-inches and that's higher than Lunger usually comes in.

"It was a change, it was definitely totally different," she said. "It was the normal starting height I think for some of the girls. It was a little hard to adjust to. I usually have my warm-ups, which I didn't have."

Seeing jumpers going as high as 5-feet, 8-inches motivates Lunger to want to get even better.

"It was amazing, it makes me want to keep doing it and get better," Lunger said.

Making it to states as a freshman is special and now Lunger wants to make this a yearly trip.

"It's pretty special, I'm definitely going to try and do it for three more years," she said.

Competing in front of a huge crowd was something new for Lunger.

"The coaches warned me about it," she said. "It's kind of stressful. I don't like to perform in front of crowds, but these people came to watch people perform, so I just performed."

Running at states was something new for the junior.

"It gives you jitters at first, and then the gun goes off and you focus."

After districts Hughes didn't think she'd be at states, but after a runner scratched she got a chance to compete.

"When I first heard I was a little scared because I originally did not qualify," Hughes said. "Then I got happy. It is an accomplishment for my school."

Northeast Bradford's Lydia Werner advanced to the semifinals in the 100 hurdles, finishing second in her heat in 15.69.

"I'm very excited, I'm glad I get a second chance to do it," Werner said. "I'm excited, I am happy, I can't wait for tomorrow."

While she had a good day in the 100 hurdles, in the 300 hurdles she hit a hurdle and fell. However, the junior recovered and still finished sixth in her heat in 49.34.

"My foot caught it and I went down," Werner said.

While she missed out on the 300 hurdle final the junior is happy to get to run today in the 100 hurdles.

"I'm glad I still have the 100 hurdles and advance to the next day," Werner said. "At least now I only have to worry about one race."

After what happened in the 300 hurdles Werner is ready to get back to work to return to states next year.

"I will definitely use this as motivation to see what I can do next year," she said.