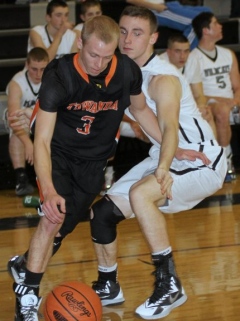 The Williamson Warriors outscored Liberty 17-7 in the first quarter on their way to a 56-48 win as they tied for the NTL small-school lead.

Brandon Schrader led Williamson with 16 points and 15 rebounds and Josh Bradbury had 15 points and eight assists in the game.

Nick Cevette and Kyle Haight had nine each for Williamson and Jon Daly had four points, while Colin Heilbrun finished with three points.

Terry Clark had 17 for Liberty and Dillon Ford finished with 15 points.

Sergey June had nine points for Liberty and Drake Schmouder had three points, while Tyler Zealfa and Tyler Boyd had two each for Liberty.

The game was tied at the half and after three quarters, before Wellsboro outscored the Trojans by two in the fourth.

The teams were tied at 23 at the half and at 33 after three, before Wellsboro scored 18 in the fourth to get the win.

Nic Ingerick had five for Wellsboro and Brandon Lamphier and Dalton Prough each had three, while Alden Weiner had two points.

Jarrod Murray had four points for Troy and Clark Jackson had three, while Jordan Nelson finished with two points.

Noah Huff had 19 points as Towanda held Athens to 15 points in the final three quarters of the win on Wednesday.

Bailey Potter had nine for the Black Knights and Noah Wheeler and Jarod Boardman finished with six points each.

Nick Place had five points for the Black Knights and Dylan Bates and Nick Innocenzo finished with three points.

Mitchell Shoemaker had one point for Towanda.

Athens was led by Joe Moyer with 11 points and Austin Lister had nine points.

Brandon Fauver had five for Athens and Jarett Priester had four points, while Aaron Barry finished with two points.

The Tigers had five players score in double figures in the win on Wednesday.

North Penn-Mansfield led 11-4 after one quarter and held on for the victory.

Dayton Wood had 12 for the Tigers and Bryce Zaparzynski had 11, while Bo Burleigh finished with 10 points.

Chandler Correll had one for the Tigers.

Burleigh had five boards and four assists and Wood had four boards.

Jon Morrison had 12 for Wyalusing and Ridge Williams and Keshon Gardener had 10 each.

Terron Millard had five for the Rams and Kyle Tinna finished with four points.

The Tigers host Athens on Friday.

The Indians outscored NEB 32-21 in the first half of the win on Wednesday night.

Tyler Melko and Bryant Painter each led CV with 12 points and Dakota Corwin had 11.

Brandon McLean, Connor Calaman and Nate Bonham each had six for CV, while Tyler Kline had one point.

Bonham had two boards and two assists, Painter had three steals and four boards, Melko had 12 boards, two assists and two blocks, Corwin had 11 rebounds and McLean had four boards.

Nate Chilson led the short-handed Panthers, who were without Jordan Goodwin and Garret Smith, with nine points and Austin Senn-Bishop finished with eight points.

Nik Geiser, Michael Williams and Elijah Arias had seven each for NEB and Mason Merrill had five points.

Arias had 10 boards for NEB and Chilson and Merrill had five boards each. Williams had three assists and Arias had three steals.

The Panthers are at Liberty on Friday.

The Redskins trailed 15-5 after the first quarter, but outscored the Warriors 30-16 in the second half to get the win.

Nick Sweet led Sayre with 20 points and Joey Galizia had 14 for the Redskins.

Marshall Felt and Nate Sweet finished with six each for Sayre and Marcos Velazquez had four points, while Matt Williams and Jalen Powers had two each.

Galizia and Felt had six boards each and Nate Sweet had four boards, while Nick Sweet and Williams each had three boards.

Williams had five assists and Galizia and Nick Sweet had two assists each. Galizia had three steals and blocked two shots and Williams, Felt and Nick Sweet each had two steals.

Canton was led by Mason Moore with 26 points and Byron Matthews had six points.

Ridge Moore had five for Canton and Trevor Route finished with three points.

Auguste Gum and Malachi Washington had two points each, while Silas Binford finished with one point.

The Griffins outscored Warrior Run 15-4 in the second quarter to pull away for the win.

Adam Szklanka and Jordan Beinlich each had double-doubles for the Griffins in the win.

Miguel Rodriguez had nine for the Griffins and John Saxe finished with five points.

Bobby Frank and Jon Pedro each finished with four for the Griffins.

The Griffins are 8-8 on the year and are at CMVT on Friday.