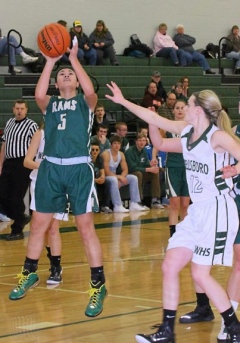 WELLSBORO - The Wyalusing Rams maintained their two game lead in the NTL large-school standings with a 53-46 win over Wellsboro on Thursday.

Wyalusing led 11-6 after one quarter, and 17-15 at the half, before scoring 22 points in the third to extend their lead.

Keon Copp had a season-high 18 points for Wyalusing and Roni Morrison finished with a double-double of 12 points and 12 rebounds.

Kasey DeVoir had 11 for Wyalusing and Paighton Martin had nine points, while Ally DeVoir finished with three points.

Jordan Butters and Rachael Tuttle had three each for the Green Hornets and Lizzie Poirier and Jada Jackson each had two points.

Jackson had 16 boards and Tuttle had four boards.

Wellsboro won the JV game 38-24 with Poirier scoring 12 for the Green Hornets and Trinity Kipp scoring six for the Rams.

ATHENS - The Wildcats moved into sole possession of second-place in the NTL large-school standings with a 59-32 win over North Penn-Mansfield on Thursday.

The Wildcats trail Wyalusing with two games in the standings, with the top two large school and small school teams moving on to the NTL Showdown.

Athens jumped out to a 16-5 lead after one quarter and never trailed.

Breana Gambrell had 11 for Athens and Shanell Baglini and Jensen Dunkling each finished with 10 points.

Emily Lunger had four for Athens and Danielle Dougherty and Mackenzie Warner each had two points.

Alysa Davey-Bostic had four for Mansfield and Kaitlyn Garverick and Emilie Dinan had three each, while Sara Wolbert had two points.

Athens is at Canton for a 1 p.m. JV start on Saturday.

Canton got four free throws from Lizzy Tymeson in overtime as they edged Williamson.

The teams were tied at eight after one quarter, before Williamson went up 17-11 at the half.

Both teams scored seven in the third and Canton outscored Williamson 18-12 in the fourth to force overtime.

In overtime Makayla Butz hit a three for Williamson, while all of Canton's points came from Tymeson's free throws.

Tymeson had a game-high 17 points and Abby Herman had eight.

Gabby Tymeson had seven for Canton and Maggy Machmer and Alexa Roy each finished with four points.

Butz led Williamson with 13 and Brittany Boyce had 10 points.

Andrea Sheive had seven for Williamson and Danielle Cross had six points.

Hannah Deacon had two for Williamson and Bethany Boyce finished with one point.

The Trojans held Towanda to 10 first-half points in the victory on Thursday.

Taylor Johnston led Troy with 10 points and Kelsey Bristol and Brooke Mattocks had nine points each.

Faith Ceely had five for Troy and Carla Proto finished with three points.

Mattocks had five steals and four boards and Kristyn Kinner had six rebounds and three steals.

Towanda was led by Megan Paulish and Ali Daum with six points each.

Kayla Miller had five for Towanda and Kayla Grimes finished with four. Kyleigh Roof, Kinslee Kriner and Lauren Risch each finished with two points for the Black Knights.

The Panthers had three players with double-doubles in the victory on Thursday.

Mallory Sponenberg had four points and Emma Hyde had three, while Marissa Harer finished with one point. NEB won the JV game 33-6 with Josie Haverly scoring 14.

Northeast Bradford is at Sayre on Tuesday.

Latascia Shadle had 19 points and her sister Makaya Shadle had 13 as Galeton moved to 8-9 on the year with the win.

Amanda Cizek had seven for Galeton and Cortney Parsell had six, while Kaitlin Akers had four and Brittany Leonard finished with one point.