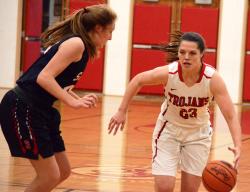 TROY — Sayre scored 16 fourth-quarter points to rally for a 60-55 lead over Troy on Friday. It was the 125th career win as a coach for Sayre's Eileen Sparduti.

"I owe that to a team who played with big hearts," Sparduti said. "I am proud to be called their coach."

The Redskins led at the half 34-26, but Troy rallied in the third outscoring the Redskins 19-10 to take the lead before Sayre's big final quarter.

"Incredible culmination to a long week. Five games in eight days, four on the road, and tonight without a starting senior. To be 5-0 is an amazing start.

"Camry Lane stepped up huge tonight, returning to the helm of the offense. Molly Ball, Kaeli Sutryk and Andi Noldy brought the senior 'refuse to lose' mentality and role players Emily Moore and Stephanie Klovekorn gave us the minutes we needed. Blair (Wampole) battled with foul trouble and sat much of the second half. Troy was physical and scrappy. Morgan Gentile scored from everyone on the floor. But, in the end, we were better able to disrupt play between her and her sister, Samantha. But, they are a formidable duo."

Camry Lane led Sayre with a season-high 21 points and Kaeli Sutryk had 15 points, while Molly Ball had 13.

Roxanne Kingsley had four points, two boards and a steal and Carla Proto had two points, four boards and an assist.

Marissa Bulkley had a rebound and five steals.

"We came up short against a tough Sayre team," Troy coach Brian Burchard said. "They shot a great percentage from the floor. Coach Sparduti has a group of talented shooters."

Troy is at Canton on Monday.

The Black Knights outscored CV12-2 in the second quarter of the win.

Cearra McLinko hit three threes on her way to 17 points to lead Towanda and Ali Daum had 14 points.

Kinslee Kriner had six points for Towanda and Megan Paulish and Shay Chandler had two points each and Katie Hackett had a point.

Daum had six boards and Courtney Bennett had four boards and five assists.

Paulish had eight boards and McLinko had four steals, while Kriner had three assists and two steals.

Amaya Walker and Morgan Cady each had three points and Patty Wattles had two points, while Brianna Whitesell had a point.

Towanda won the JV game 40-19 and Chandler had 16 for Towanda. Mikarra Allen had 10 points for Williamson.

Lauren Smith had 22 points and 16 boards as the Tigers pulled out an NTL girls' basketball win Friday.

NP-Mansfield jumped out to a 22-15 point lead but the Panthers hung tough, keeping it a seven point deficit at the half and after three quarters.

They outscored the Tigers in the fourth quarter 15-14 but NP-Mansfield went 12-for-16 from the charity stripe to ice the game.

The Hornets jumped out to an 15-3 first quarter lead en route to their NTL girls' basketball win Friday.

Emily Lunger scored 25 points as the Lady Wildcats improved to 2-0 on the season.

Avery Priester had four points to round out the Athens scoring.

The Rams got 12 points from Emily Champluvier and 11 from Madelyn Edsell in the win.

Ashley Carter had six points and a board and Morgan Woodruff had four points, three assists, six boards and a block, while Hannah Chamberlain had two steals, two assists and three boards.

Ellie Binford led Canton with 12 and Emalie Marnati had 10 points. Shea Roupp had six for Canton, Mackayla Wesneski had five and Tamara Hess had two points.