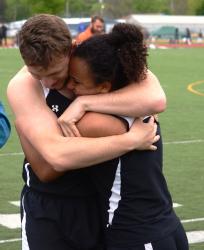 "It definitely feels very good," Wildcat coach Dave Gabriel said. "We had some setbacks the very last week in preparation for this. We lost a hurdler to an injury which was a lot of points for us. You know we talked to the kids throughout the week and every coach says they showed up but they just showed up today. But that doesn't capture what they did today. The times that they produced and the distances that they threw and jumped, it's absolutely remarkable."

The veteran coach noted their team spirit was their biggest asset.

"They pulled together as a team and picked each other up," he said. "They got this done by themselves. Coach Mastrantonio always said, 'the hay's in the barn.' It just means that we're ready."

Athens' Kalen Keathley did something he hadn't done since he was a sophomore — go under 11 seconds in the 100.

"It's fantastic," Keathley said about his time. "That's my PR, that's the fastest I've ever run. I had a good warm up before my trials, I ran my trials. I didn't think they were that fast and they were 11.02. It freaked me out a little because I wasn't expecting that at all but then I was like 'today's the day. Today's the day I'm breaking 11.'"

Keathley got a good 30-minute warm up, a smart move on a chilly day.

"I wanted to make sure everything was perfect before I run," he said. "I got into the blocks, I was real nervous and I felt it. I was running on air and when I hit the finish line I knew I did it, that was it."

North Penn-Mansfield edged out Athens and Canton to win the 4x400 relay.