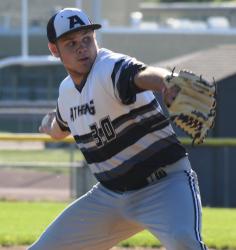 The Wildcats got on the scoreboard first with a run in the bottom of the second. Wellsboro tied it up in the third but two runs in the fourth put Athens up for good.

Collins started and earned the win, going five innings to strike out six while allowing three hits, three walks and no earned runs.

Carson Davis went 2-for-4 to lead Wellsboro while Dalton Prough and Caleb Tennis also had hits. Silas Wagaman scored their run while Billy Lechler got the RBI.

Taynton Repard started and earns the loss, going 5 1/3-innings to strike out two while allowing six hits, two walks and three runs, one of them earned.

Prough finished out, striking out one.

Tied at two in the bottom of the seventh a 1-out hit by Stillman scored Grand Caplan in a walk-off win.

Runs in the first and third gave Waverly a 2-0 lead but SVE scored twice in the sixth to knot things up.

Stillman went 2-for-4 with a run and an RBI for the Wolverines while Dylan Cooney, Zach VanHouten, Hunter Bodine, Cole Jenner and Paul Girolamo also had hits.

Devin Garrison started and went the first 6 1/3-innings for the no decision. He struck out eight while allowing nine hits, two walks and two earned runs on 100 pitches.

Eithan McEnulty went the final two-thirds for the win. He struck out two while allowing one walk on 17 pitches.

Troy led 3-1 after the first inning but the Rams cut it to 3-2 after the third. The Trojans extended it to 4-2 in the fourth but a 3-run fifth by Wyalusing put them up 5-4.

Troy tied it up with a run in the bottom half of the inning then exploded for the big inning in the sixth.

Nate Martin added a double with an RBI with Bailey Cohick and Brandon Zechman also getting hits.

Mason Bellows started and went two innings, striking out two while allowing one walk, six hits and two earned runs. LaBadie finished out for the win, going five innings to strike out four while allowing five hits, one walk and three earned runs.

Shane Fuhrey was 3-for-5 with a run scored to lead Wyalusing while Riley God (2-for-4) and Kyle Warner (2-for-4) also had multiple hit games. Warner had a double while both players scored a run.

Dylan Williamson had two hits, including a double, and three RBI to lead NPM to their 7-5 victory over Towanda on Wednesday.

Adams started for NPM and pitched six innings, allowing five runs, four earned on eight hits and striking out three for the win. Hillson earned the save after pitching a scoreless inning to end the game, striking out one.

Ben Cook led Notre Dame to their 20-9 victory over Newark Valley on Wednesday with four hits.

Also for ND, Iman McKay had one hit, Isaiah McKay had two and Gary Raupers, Nate Snavely and Erik Charnetski each had three hits.

Connor Hanafin finished with three runs, three hits, including a double and a triple, and three RBI to lead Sayre to their 20-3 win over Williamson on Wednesday.

Colin Heilbrun started the game for Williamson, throwing one and one third innings, allowing nine runs, five earned, on six hits. Ethan Shaefer relieved him for three and two thirds innings and allowed 11 runs, four earned, on 13 hits and striking out two.