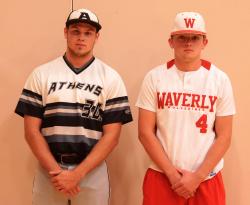 Cody Jennings of Athens had a year to remember.

He didn't just put up stats, either. Jennings led the Wildcats to their fourth straight league title and won an elusive District IV title.

He also gets one more honor — The Daily and Sunday Review All-Region baseball Player of the Year.

The Valley took home quite a few All-Region awards.

Waverly's Brady Roney is the Pitcher of the Year while Hunter Bodine is the Co-Newcomer. Roney went 6-0 with an 0.84 ERA.

Tioga's Parker Hendershot earned the Most Versatile Award for his combination of hitting, defense and pitching while North Penn-Mansfield's Kipp Hillson is the Defensive Player of the Year.

Hendershot hit .645, good enough for ninth all-time in the state of New York, along with eight triples and 45-RBI.

Rounding out the major awards is Wellsboro coach Philip Prough as the Coach of the Year. Prough led the Hornets to their first District IV title.