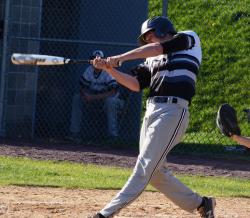 ATHENS — Cody Jennings went 4-for-4 with a double, two runs and an RBI to lead Athens past Troy 10-3 in NTL baseball action Tuesday.

The Wildcats jumped out early, going up 5-0 after the first two innings en route to the win.

Marc Felt and Joe Parshall also had hits while Daniel Joyce, Nate Kennedy, Kaden Rude and Brock May scored runs. Joyce knocked in a run, too.

Parshall started and went the first three innings for the win. He struck out four while allowing one walk and one hit.

Tyler Williams went 2-for-2 to lead the Trojans while Matt LaBadie had a double with a run scored and an RBI.

Nate Martin and Mason Bellows also had hits. Martin scored and knocked in a run with Bellows also getting an RBI. Bailey Cohick crossed home as well.

Bellows started and scores the loss, going five innings, to strike out one while allowing eight hits and seven runs, two of them earned.

LaBadie pitched an inning, striking out one while allowing one hit, one walk and three unearned runs.

In a cross-town match-up, it was the Wolverines getting the key hits to pick up the non-league win and hand the Redskins their first loss of the season.

The Redskins struck first in the bottom of the first as Sam Wheeler scored on a pass ball to go up 1-0.

Errors in the top of the second allowed Waverly to score three runs as Nate Bennett, Hunter Bodine and Eithan McEnulty all scored to put the Wolverines up 3-1.

Sayre got a run back in the sixth as Nate Sweet scored off a Connor Hanafin single to cut it to 3-2.

But Waverly added two more insurance runs in the seventh to secure the win. A Bodine triple brought in Brayden Roney, followed by McEnulty hitting a sacrifice fly to score Bodine.

Bodine went 2-for-4 on the day while McEnulty was 2-for-3. Grant Caplan was also 2-for-4 with a double and Dylan Cooney went 3-for-5 with an RBI. Bennett's double was Waverly's other hit.

Roney went the distance for the win, striking out three while allowing six hits, one walk and two runs — one of them earned — on 83 pitches.

Jon Cron went 2-for-3 to lead the Redskins with Wheeler, Sweet and Hanafin getting the other hits.

Jordan Rockwell earned the loss, going five innings to strikeout nine while allowing seven hits and three runs, none of them earned, on 96 pitches.

J.P. Shaw had one run, two hits, including one double, and two RBI to lead NPM to their 13-2 win over Wellsboro on Tuesday.

Dinger started the game for NPM, allowing two runs, one earned on five hits and two strikeouts. Hillson finished the last innings, striking out one and allowing two hits and no runs.

Prough and Wagaman both scored while Tennis and Lechler knocked in the runs.

Davis started and went 1 1/3-innings with one strikeout, six hits, four walks and 10 runs, eight of them earned.

Taynton Repard went the next 1 2/3-innings with two walks and one hit.

Lars Thomason pitched five and one third innings, striking out two and allowing two runs, one earned to earn the win in Towanda's 11-3 win over Wyalusing on Tuesday.

Jon Morrison, Zach Bryun and Joe Wheeler each scored a run for Wyalusing.

Brown started the game for Wyalusing and allowed seven runs, two earned, on two hits in one inning. Warner relieved him for one inning and allowed two runs, one earned, and struck out one. Mason McGroaty pitched the next inning and one third, allowing no runs and striking out one.

"It's nice to win a ballgame," Towanda coach Bill Sexton said. "We've been in every game and we've played better than our record suggests. It's nice for the boys to get one. Hopefully it's something we can build on."

Wynn Doan had three hits, including a double, two runs and two stolen bases to lead CV to their 4-0 win over Canton on Tuesday.

Chris Lingle and Owen Fitzwater each had a hit for CV; Christan Kemp had a hit and a run scored; Corey Wells had one run, one hit and an RBI; and Seth Huyler had one hit and two RBI.

Canton's Marnati started the game and pitched 3 1/3 innings, striking out three and allowing no runs on three hits. Michael Smithers relieved him and struck out two and allowed four runs, three earned, on five hits. Uriah Baillie finished the last two thirds of one inning and retired the side on five pitches.