NEB gets walk-off win over Williamson. 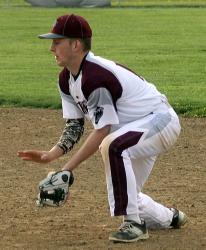 ROME — With one out in a tie game in the seventh inning, bases loaded, Derick Newman hit a walk-off single to give NEB the 4-3 edge over Williamson on Monday.

Phytila then threw one third of one inning, walking two and Grant Allis pitched the last 1 1/3 innings, allowing one hit and earning the win.

"I'm pleased with the comeback," NEB coach Brian Pifer said. "Walk-offs are always good, it feels good to get some momentum going."

Caleb Tennis scored a run, hit a double and had two RBI to lead Wellsboro to their 4-2 win over NPM on Monday.

For Wellsboro, Dalton Prough had two runs and two hits, Cam Tennis finished with one run and one hit, Billy Lechler added one RBI, Brent English had one hit and a RBI and Johnny Rowland had one hit as well.

For NPM, Kipp Hillson had one RBI, J.P. Shaw and Joel Whitteker each had one hit, Dewey Wise finished with two runs and two hits and Dylan Wesneski had one hit and one RBI.

Logan Adams went the distance for NPM, allowing four runs on six hits and striking out one.

Athens scored three runs in the first two innings, which was just enough to tide them over to their 3-2 win over Troy on Monday. Athens now has a two game lead over NP-Mansfield in the NTL standings.

Matt Collins started for Athens, throwing 1 2/3 innings. Collins struck out four batters, walked three and allowed no runs and no hits. Joe Horn relieved him for 4 1/3 innings, allowing two earned runs on five hits and striking out three. Cody Jennings pitched the last inning for Athens, striking out the side.

Joe Wheeler scored three runs and had tone hit to lead Wyalusing to their 6-5 win over Towanda on Monday.

Thomason started for Towanda, allowing five runs, none earned, on five hits and striking out three in five innings of work. Troy Pierce relieved him for the last inning, allowing one unearned run on one hit.

Holdan Hitchcock started for Wyalusing, allowing five runs, none earned, on eight hits and striking out four in 4 1/3 innings.

Chandler Brown pitched the last 2 2/3 innings for Wyalusing, allowing no runs and striking out three.

Corey Wells scored two runs on offense and threw a complete game, allowing one run on four hits and striking out three to lead CV to their 9-1 win over Canton on Monday.

For Canton, Silas Binford, Seth Robbins and Nick Schoonover each collected one hit, Garrett Storch scored a run and Michael Smithers had one hit and a RBI.

Cook and Erick Charnetski each finished with two hits and Gary Raupers had a double and two singles.