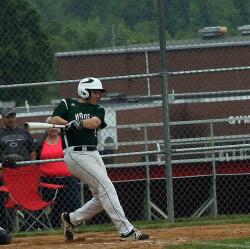 CANTON — In a classic pitcher's duel, both Wellsboro and Old Forge had chances to get the winning run.

It was the Blue Devils, though, who were able to capitalize.

They scored in the top of the sixth and went on to win 1-0 in the PIAA, Class AA baseball first round state game Monday.

Wellsboro coach Philip Prough knew that it could come down to execution.

"The run that scored was a walk," Wellsboro coach Philip Prough remarked. "And when we had our opportunity to bump somebody over, we didn't execute, and honestly two fundamental things in baseball that didn't go our way and we lost 1-0, and that's baseball. And it was a good quality game by both sides. Old Forge played pretty well and tip your hat to them. They made one more play than us."

Old Forge hurler Brendon Mozeleski was strong throughout. He allowed just four hits and two walks while striking out eight to get the seven inning shutout.

And he did it all on 98 pitches, two short of the PIAA single game maximum.

"We knew he had a good curveball and showed that tonight," said Prough. "I think for us, we basically knew the first four innings were the key to the game. We're we going to be in the game after four innings just because he was going to tire a little bit. And you started seeing that towards the second half of the game and we just weren't able to capitalize as often as would have hoped. We knew if we were there through the first four innings we would be there at the very end."

Wellsboro freshman Carson Davis was his equal, though. Through five innings, he allowed just three hits, two walks and one earned run while striking out three on 82 pitches to score the loss.

"That was pretty gutsy," Philip Prough remarked about Davis. "I thought he did spectacular. As a freshman, a big stage, he's a power pitcher, so you know you're going to get a lot of pitches. He's not finesse, and I think he really kind of proved to himself more than anybody else that he could handle it. That was good to see."

Johnny Rowland started for the Hornets, going two innings to allow three hits and one walk on 40 pitches while striking out none before being pulled.

"He wasn't sharp and we could see that," explained Prough for the early pull.

Banks also gets the RBI, driving Boettger in on a ground out.

Old Forge threatened the first three innings, culminating in the third when Mozeleski tried to steal home on a pick-off to first base.

Wellsboro's defense was strong, though, and Mozeleski was caught at home as Cam Tennis threw home to his brother Caleb Tennis, who applied the tag to game the game scoreless.

"Our defense is our strength, there is no doubt about that," said Philip Prough. "They kept us in."

The Hornets' best chance to score came in the bottom of the fourth.

Caleb Tennis drew a 2-out walk and Lucas Citrino came on to run for him. He took second on a pass ball to get into scoring position.

Parker Mann, coming in to play for the injured Brent English, hit a blooper that fell in front of the right fielder.

Citrino tried for home but Old Forge's 9-3-2 relay caught him at the plate and the game remained scoreless.

The Hornets were lights out defensively in the fourth and fifth innings but in the top of the sixth Boettger drew a lead-off walk.

After an out and a single, runners were on the corners for Banks, who hit a ground ball to Prough at shortstop.

All he could do was get the out at first, and Boettger put Old Forge on the scoreboard.

Krenitsky, who had the single, came close to getting called out on strikes as Davis looked to hit the top end of the zone on a curveball. However, it was called a ball and a couple pitches later Krenitsky hit one into the gap.

Rowland made a diving play on the ball, catching it initially but it popped out of his glove when he hit the ground.

If both breaks don't go Old Forge's way, they still could be playing.

In the bottom half of the inning, Prough singled and got as far as second base but was left stranded there.

Then, in the bottom of the seventh, Rowland reached second base on an overthrow to first with two outs. He would take third on a wild pitch, putting the tying run at third base.

But it was Mozeleski's game throughout, and he ended it with a called third strike to get the win.

Old Forge will now the play the winner of state power Neumann-Goretti and District I champion Dock Mennonite on Thursday. Their first round game was postponed to today.

For Wellsboro, this was a monumental season, winning their first baseball district title in school history and reaching the state playoffs for the first time.

But it was also a learning season as every single player will be back next season.

"We have a couple of pretty good eighth-graders that will add to the depth that we have," Prough explained. "I think the fact that we got this far and that we understand baseball — what a lot of people don't see is how much the kids learned about baseball itself. How to play the game. The wins are great, yes, but actually how to play the game and how you play it to win a game, to see them learn that throughout this year, we're certainly looking forward to applying that a lot more next year."