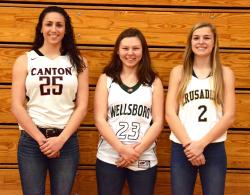 She put up over 20 points per game thanks to her ability to knife into the lane and also hit from deep. However, she was also one of the best defensive players in the area along with doing just about whatever the Trojans needed.

Most importantly, Gentile helped Troy to improve by 11 wins this season and make districts after Troy won four games all of last year.

Athens took home another league title thanks in large part to their defense, which was anchored by Breana Gambrell. Gambrell, one of the premier athletes in the state, was a rebounder, shot blocker and thief for Athens as they pressed teams into submission.

Gambrell is the Defensive Player of the Year.

Waverly's Elle Nittinger was one of the most prolific scorers in the area at just under 20 points per game. She led the Wolverines to an IAC title this season and is the Offensive Player of the Year.

Sullivan County had arguably their most successful girls' basketball season ever, going undefeated in Mid-Penn League play and reaching the District IV, Class A title game. Rookie Jess King played a big part of that run, especially when injuries popped up.

King is the Newcomer of the Year.

(While Morgan Gentile is a newcomer, because she is the Player of the Year she isn't eligible for any other major awards).

After a rough start, Notre Dame finished strong, reaching the Section IV semi-finals for the second straight season. Courteney Crater's effort and persistence was a big reason why.

Crater is the Hustle Award winner.

Camry Lane's ability to handle the ball and score was important for a balanced Sayre team. The fact that she did it by coming off the bench was even bigger.

Lane is the 6th Player of the Year.

And Lane's coach Eileen Sparduti is the Coach of the Year.

The Redskins lost their best player from last season and appeared to get better. They ran the table in the NTL second division and only lost four times all season as they won their first ever District IV title.