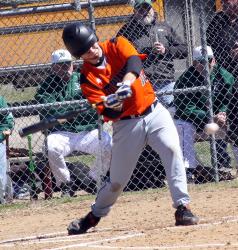 WYSOX — Wellsboro jumped out early and hung on late as they beat Towanda 10-6 in NTL baseball action Saturday.

The Hornets led 6-0 after the first inning and led by as much as 10-1 in the middle of the fifth, but Towanda held on.

They scored two in the bottom half of the inning then tacked on three more in the seventh. However, Wellsboro's cushion was too much and the Hornets got out of the late-game jam to come away with a league win.

"Another good performance today," Wellsboro coach Philip Prough said. "Offensively, we have another game with many players having hits. Our pitching continues to be consistent too. We're pleased, but have more to work on."

Towanda coach Bill Sexton felt his team did well after the slow start.

"The kids stayed in it," he said. "We had runners on in the seventh when it ended, but too little, too late I guess."

Dalton Prough went 2-for-2 with two doubles, three runs and 2-RBI for Wellsboro, while Johnny Rowland had a hit, two runs and 2-RBI.

Davis started and earns the win, going 2 2/3-innings to strike out three while allowing one unearned run, one hit and one walk.

Taynton Repard came on in relief in his first varsity pitching experience. He went 3 1/3-innings with one strikeout, two hits, two walks and two earned runs.

Prough pitched the seventh, allowing three hits, two walks and three runs — one of which was earned.

For Towanda, Zane Neubert had a double with 3-RBI while Keegan Kisner had a double, an RBI and a hit.

Lars Thomason had two hits, a run and an RBI; Ryan Bartholomew had a hit and two runs; while Brett Crispell and Caleb Lines also scored.

Thomason started and earns the loss, going 1/3 of an inning with three walks, three hits and six runs, five of which were earned.

Ricky Smiley pitched 1/3 of an inning with one walk, one hit and one earned run.

Lines went two innings with one strikeout, one walk, three hits, two runs — one of which was earned.

Tyler Bidlack threw in the sixth with one strikeout and Kisner pitched in the seventh with two strikeouts.

The Knights had more success during a JV double-header Saturday afternoon and evening.

In the first game, the duo of Bobby Farley and Devin Dunn threw a no-hitter for Towanda in the 3-0 win.

The second game ended in a tie with only one hit given up by the Knights.

The Warriors pounded out 12 hits in the opening game of a Saturday double-header.

Ella Durst (2-for-2) had four runs scored while Kylee Butz, Micaiah Welch, Emilee Yusko and Kendra Colegrove all went 2-for-4 on the day.

Butz had 3-RBI and two runs scored, Welch had an RBI with two runs, Yusko had two runs with 2-RBI and Colegrove scored with an RBI.

Brianna Padgett and Emma Durst also had hits. Padgett scored three times while knocking in a run, and Durst scored with 2-RBI.

Emma Durst got the win, striking out five while allowing no walks and nine hits.

In the nightcap, the Warriors saw themselves down 3-0 after the first inning but went on to out score NoPo 9-1 from the second through the fifth to get the non-league win.

Yusko was 2-for-4 with a run scored while Welch had double, RBI and three runs scored.

Emma struck out nine in the win while allowing seven hits and two walks.

The Trojans never recovered from a bad first inning in their non-league loss Saturday.

Watson started and went 2/3 of an inning, allowing two hits, three walks and five runs — three of them earned — while striking out one.

Caitlyn Hoffmann finished out, striking out two while allowing six hits, three walks and six runs — three of them earned.