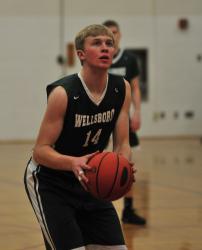 TROY — Wellsboro jumped out early in their 52-37 win at Troy, Monday.

The victory plus NP-Mansfield's win means both teams will be co-champions in the NTL-Division I boys' basketball league.

The Hornets led 16-11 after the first quarter then held Troy to four points in the second to take a 30-15 lead at the half. They never looked back from there.

Dalton Prough and Alden Weiner had 13 points a piece to lead Wellsboro while Jacob Singer added 10.

Wellsboro won the JV game 50-10 as Tanner Button and Billy Lecher had 11 points each.

The Trojans travel to Athens on Wednesday.

Brock Burleigh and Shane Kelly both recorded double-doubles to give the Tigers the win.

Jon Morrison had 12 points to lead the Rams while Will Martin scored 11. Calvin Burke had six, and Chandler Brown added four, while Kasar Cameron and Drew Masters had two points a piece.

The Tigers finish the regular season 18-4 and will travel to NEB on Thursday for a 7 p.m. game in the NTL Showdown.

Daniel Joyce had a double-double of 22 points and 11 boards to lead the Wildcats to the NTL Division-I boys' basketball win Monday.

Zerik Lochner and Brayden Manchester had six points a piece while Ricky Smile had four points and three steals.

Athens won the JV game 45-37. Aaron Lane had 16 points for the Wildcats while Dylan Hartman had 10 for the Knights.

David Ford had 23 points to lead the Panthers to an NTL Division-II boys' basketball win Monday.

John Saxe and Alex Baumunk had 16 points each to lead the Griffins to a Mid-Penn League boys' basketball win Monday.

The Griffins host CMVT on Wednesday.