Wellsboro rallies past Athens in OT. 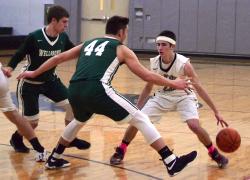 ATHENS — Down 16 in the second half, the Green Hornets rallied for the 58-55 victory over Athens in overtime on Friday night.

"We definitely needed it," Wellsboro's Quinn Henry said. "We are in the hunt for the showdown, we are trying to stay the top seed and fight Mansfield for the top spot. We had to fight for this one, but we fought hard."

Down 16 in the third, the Green Hornets started to fight back.

Back-to-back threes by Jacob Singer cut the deficit from 11 to five in the final minute of the third.

"It is huge," Wellsboro coach Todd Outman said. "I said we just have got to get this down under 10 in the fourth quarter and we've got a chance. The kids did what we asked of them. They played with heart and we squeaked it out."

In the fourth quarter Henry hit back-to-back threes to get Wellsboro within two points and a pair of Dalton Prough free throws tied the game for the Green Hornets.

"My teammates found me open," Henry said of the threes. Jake Singer, they were keying on Jake Singer, so I get left wide open when my three point percentage was 10 percent."

Athens got a big three from Daniel Joyce to take a three point lead in the final minute, but an Alden Weiner free throw cut the deficit to one. Wellsboro got the offensive rebound after a miss on the second free throw and after a timeout Henry drove to the basket. The ball was poked away, but Henry recovered and made the layup to tie the game. A last second heave by Athens bounced off the rim as the teams headed to overtime.

"I wasn't sure if it was going to go out of bounds, but I saw where I was and put it up off the glass and luckily it went in," Henry said.

In overtime Collin Pietropola was a force with six points.

Wellsboro led by one with 20 seconds left when an Ethan Lane shot hit off the rim and Wellsboro got the rebound. Wellsboro went to the line and made one, but they got the offensive rebound on the miss. Again Wellsboro made one free throw, grabbed the offensive board and ran out the clock.

For Wellsboro there was confidence they could come back.

"We weren't too worried, we knew we could battle back," Henry said. "We just needed to hit a few shots. We were really struggling early, our defense was struggling really bad. We picked it up and hit some clutch shots."

Outman was happy to see the comeback.

"It was huge," he said. "The kids have worked hard and it was kind of dismal to see it possibly slipping away, but they've got heart and they've got fight."

Henry led Wellsboro with 19 and Dalton Prough had 16.

Singer and Pietropola had nine each and& Nic Ingerick and Brandon Lamphier each had two points, while Alden Weiner had a point.

Lamphier had six boards and four assists and Singer had four boards and a block.

Prough had a double-double, adding 12 boards, and Henry had four assists and six rebounds.

Ingerick and Weiner each had four rebounds, Andrew Brelo had two boards, Brandyn Tuttle had three boards and Pietropola had nine boards and two assists.

Kalen Keathley had six for the Wildcats and Joyce had three, Zack Jayne two and Aric Westbrook one point.

Lane had six boards, three steals and an assist and Jayne had five boards and four steals.

Keathley had four steals and Westbrook had three boards.

The Warriors held the Panthers to a season-low in points as they earned an NTL Division-II boys' basketball win Friday.

Byron Matthews and Ridge Moore had 16 points each to lead Canton while Michael Smithers added six.

The Trojans outscored the Rams 22-12 in the fourth quarter to pick up the NTL Division-I boys' basketball win Friday.

Clark Jackson led Troy with 18 points, 12 of them in the fourth quarter to spark the run.

Jon Morrison had 16 points to lead the Rams with Calvin Burke scoring seven and Scott Eberlin adding five. Will Martin and Brandon Brown had four points each while Kasar Cameron notched two.

The Redskins held off a furious fourth quarter rally from the Warriors in their NTL Division-II boys' basketball win Friday.

Sayre led 46-30 after three quarters when Williamson scored 25 points in the fourth. The Redskins hit enough free throws, though, going 9-for-19 in the quarter to win the game.

Marcus Bauman had 23 points and 13 boards to lead Sayre while Ryan Murrelle netted 16.

Rockwell and Ray both had four assists.

The Indians outscored NP-Liberty 21-12 in the fourth quarter to pull out the NTL Division-II boys' basketball win Friday.

Garrett Bickhart and Brandyn Choplosky had 13 points each to lead the Mountaineers while Drake Schmouder added six.

Devon Harer had four, Tyler Boyer netted two while Tyler Repard and Gunnar Rice had one point each.

Dalton Potter and Luke Tama had 11 points each to lead the Black Knights while Matt Madigan had six and Brayden Manchester netted five. Lars Thomason notched three, Troy Pierce had two and Dylan Hartman added one.

Shanell Baglini and Emily Lunger combined for 44 points to lead the Wildcats to the NTL girls' basketball win Friday.

Breana Gambrell had a double-double of 14 points and 13 boards to go with three blocks while Ariana Gambrell added 13 points, five boards and four steals.

Ashley Faus had 13 points to lead the Griffins in their Mid-Penn League girls' basketball win Friday.