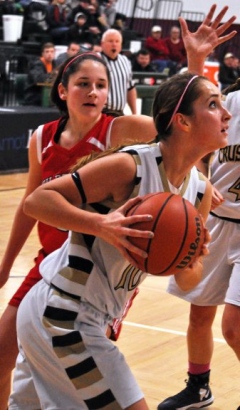 ELMIRA, N.Y. - Mansfield couldn't hold on as they fell to Johnson City 53-51 in the first round of the Jack Terwilliger division of the Josh Palmer Fund Basketball Tournament Wednesday.

The Tigers led 18-11 after the first quarter but Johnson City cut the deficit to 28-26 at the half. Johnson City would take a 2-point lead into the fourth quarter where they out scored Mansfield 12-10 to win.

The Tigers had an inbounds with one second left to tie it but Taylor Hillson's alley-oop pass to Reece Correll was just off the mark.

Colin Arvanitakis led Johnson City with 14 points while Matt Czeitner chipped in with 13.

The Tigers will play the loser of the Troy-Mynderse Academy game slated for 3:15 p.m. today. The consolation is set to tip off on Friday at 12:45 p.m.

ELMIRA, N.Y. - Ridgebury resident Olivia May couldn't be stopped as she recorded a double-double to lead the Crusaders to a first round win in the Josh Palmer Fund Basketball Tournament Wednesday.

Notre Dame led 8-6 after the first quarter then found themselves down 16-14 at the half. They rallied in the third, out scoring Guilderland 10-6 to take a 2-point lead into the final quarter.

From there they held on for the win.

May had 20 points and 11 boards to lead Notre Dame while Mara Skordynski added six points and seven rebounds.

Notre Dame will take on Horseheads, a 68-29 winner over Elmira, in the championship game on Saturday at 5 p.m.