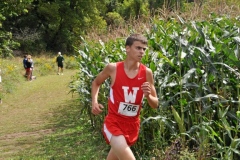 MANSFIELD - It was a little different atmosphere for Wyalusing senior Erika Huffman.

She watched as the other teams at Mansfield University's Flatland High School Invitational huddled up before the race.

She watched the teams do their cheer and run together to warm up.

And, there stood Huffman. Alone at the starting line. The lone girl representing Wyalusing on Saturday morning.

However, Huffman went to the race to get a chance to see some teams she doesn't normally see, like New York schools Elmira, Owego, Waverly and Edison, and to run against Elk Lake.

She also knows that in the future there may be a time when she is the lone Wyalusing girl at a race.

While the atmosphere may have been different for Huffman the results weren't as Huffman picked up another victory, winning in 19:15.83, topping the next finisher (Malinda Wheeler of Elmira), by nearly 13 seconds.

"It's different competition and it really pushed me," Huffman said.

One of the things about the race was seeing the girls from New York schools that she doesn't know much about.

"It's a little intimidating, I don't do much research on schools like Owego or Elmira because they aren't at my state meet," Huffman said. "It's a little different, you don't know much about them."

CV's Ben Williams was 72nd and Quin Abercrombie of CAnton was next.

For the girls Wellsboro was seventh at 205, second among Class A schools

Oakland Catholic won at 57 points and the top Class A school was Penn Cambria at 149.