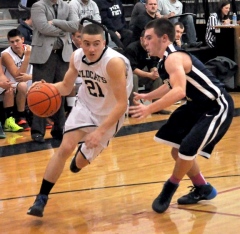 ATHENS - The Wildcats got 22 points from Brandon Fauver while Dan Moyer chipped in with 13 as Athens held off Mansfield to win their season opener 57-55 in NTL boys' basketball action Tuesday.

The teams were tied at 13-all after the opening quarter when Athens took a 27-20 halftime lead. They would extend the lead to 44-36 going into the fourth quarter.

That's when the Tigers rallied, eventually knotting the game up but Athens would prevail as Fauver had 11 points in the final frame.

The Redskins got 38 points from Nate Williams and Seth Murrelle as they picked up an NTL boys' basketball win on the road Tuesday.

Sayre jumped out to a 17-10 first quarter, then kept that seven point advantage to halftime, 28-21. The Hornets cut into the deficit some by the end of third quarter as Sayre led 38-32 but Williams scored eight points in the fourth quarter to lead the Redskins to the win.

For the Hornets Joey Doganiero had 14 points and eight boards while Michael Pietropola had 10 points.

Sayre won the JV game 35-25 behind 12 from Joe Galizia while Brandon Lamphier had 13 for Wellsboro.

TOWANDA - 11 different players scored as the Black Knights picked up an NTL boys' basketball win Tuesday. The Black Knights jumped out to a 21-6 first quarter lead and pushed their advantage to 44-14 at the half. From there they out scored NEB 24-19 in the second half.

Brad Sparbanie rounded out the Towanda scoring with two points.

Jordan Goodwin led Northeast with 11 points and eight boards while Garret Smith had six points and eight assists. Austin Senn-Bishop, Nick Geiser and Tommy Rought had four points a piece while Elijah Arias and Andy Seeley rounded out the scoring with two points each.

Northeast won the JV game 37-22 behind 10 points from Rought. Boardman had eight points to lead Towanda.

The Panthers rallied from a nine point halftime deficit to pick up the NTL boys' basketball win Tuesday.

North Penn would out scored the Trojans 15-9 in the third to cut the deficit to 35-32, then tallied 24 fourth quarter points to pull ahead for the victory.

Jed Wright led Troy with 18 points while Evan Polly added 10. Brandon Mattocks scored seven, Thomas Swain had six and Ryan Reeves chipped in with five to round out the Trojan scoring.

The Griffins got a double-double from Conner Wylie while also hitting 10 threes in Heartland Conference basketball action Tuesday.

Sullivan jumped out 21-3 in the first quarter and never looked back.

Wylie had 10 points and 10 boards while Sean Flannery and Bob Polcrack had 17 points each with both of them hitting five threes.

Sullivan won the JV game 52-19 behind 16 points from Miguel Rodriguez.

A scoreless third quarter by the Wolverines was the difference in the IAC boys' basketball contest.

The Senecas took a 32-27 lead into halftime, then out scored Waverly 12-0 in the third to secure the win.

The Wolverines travel to Edison next Tuesday.