Knights pull away from Montrose. 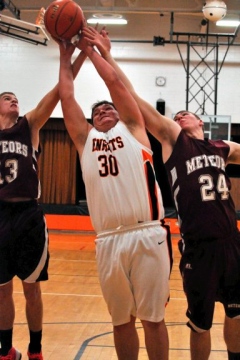 TOWANDA - Noah Huff had 28 points, including 12 in the fourth quarter, as Towanda pulled away late for a 62-48 win over Montrose on Thursday.

Down one at the half, the third quarter was back and fourth between the two teams, until David Rodenhizer got hot scoring eight of his 18 in the quarter as the Black Knights scored 20 points in the quarter.

Noah Wheeler and Nick Place had six points each for Towanda in the victory and Garrett Mosier and Lij Griffin each added two points.

Rodenhizer had seven rebounds and three steals for Towanda and Dylan Bates and Wheeler had three assists each in the victory.

The Athens boys led 30-10 at the half, but Liberty scored 22 in the third and got within seven in the fourth before the Wildcats closed it out.

Athens got 17 from Dan Moyer in the victory and Brandon Fauver had 14 for the Wildcats.

Tyler Forbes had seven for Athens and Jarrett Priester and Ryan Segar had six each, while Joe Moyer added five and Zane Vargason had three points.

Moyer had a double-double with 11 rebounds and Forbes had 10 assists and two steals, while Priester had six boards.A

Liberty was led by J.J. Walker with 15 and Cody Fritz had 10 points.

Cody Schmouder had nine for Liberty and Dalton Litzelman had six, while Harley Kilmer had four and Dillon Ford had one point.

The Trojans got 24 points from Brandon Mattocks in the victory on Thursday.

Canton led 37-35 at the half, but Troy scored 50 points in the second half, 31 of those in the fourth quarter.

Evan Polly and Jed Wright each had 16 points for Troy and Ryan Reeves finished with 15 points.

Gage Burns had seven for Troy and Alex Butcher finished with one point.

Canton was led by Jesse Lattimer with 17 and Mason Moore had 13 points.

Chrstian Thoren and Brandon Shrader had eight each for CAnton.

Dylan Fleet finished with seven for the Warriors and Tre Sawtell had three for Canton and Chris Whitehead had two, while Kerry Moon had one point.

The Redskins got 25 points from Nate Williams and Marshall Higley finished with 15 in the win.

Seth Murrelle had 10 points and Nick Sweet had nine as nine Sayre players scored in the victory.

Tyler Eaton finished with four points for Sayre and Matt Williams, Marshall Felt and Joey Galizia each had two points and Cuyler Kochin finished with one point.

Nick Cevette led Williamson with 17 and Chris Davis had 11, while Troy Adriance finished with 10.

Sayre won the JV game 40-23 with Pat Cooley and John Esposito scoring eight each in the win.

Up 29-25 at the half the Green Hornets scored 38 in the second half, including 24 in the fourth quarter, to get the win.

Kieron Smethers led Wellsboro with 20 and Dylan Prough had 14, while Joey Doganiero finished with 12 points.

Michael Pietropola scored seven for Wellsboro and Nick Marple had two, while Kyler Widows and Brandon Lamphier had one point each.

Josh Nudd had four for CV and Tyler Mead and Dakota Corwin had three points each.

Bo Burleigh led the Tigers with a double-double, scoring 19 points with 13 rebounds and three assists.

Brady Andrews, Jarrod Burd and J.P. Shaw had seven points each for the Tigers and Bryce Zaparzynski finished with six points, while Ryan Campbell had five points.

Chandler Correll and Jordan Williams finished with two points each for the Tigers.

Correll had eight boards and two blocks and Shaw had six boards, while Andrews finished with three steals.

Cody Pickett had five for Wyalusing and Collin Fassett had four points, while Devon Carr and Dylan Bulick each had three points and Ridge Williams and Theron Millard had two points each.

Wyalusing won the JV game 51-46 with Williams netting 22 for Mansfield in the loss.

Mansfield is at NEB on Saturday.

Nathan Romanauski had 11 points and Kyle Bert and Seth Winward had 10 each in the win.

Ryan Gorsline and Nathan Helmuth had five points each for North Rome.

Nate Gray had three for North Rome and Ben Haefka, Johnny Mosier and Brandon Beers all had two points in the win.

Haefka had seven boards and four steals and Bert had six boards.

Romanauski had three boards and two steals and Mosier, Helmuth and Gorsline had three steals each.