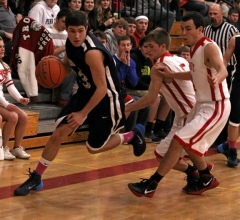 The Trojans were able to pressure the Tigers into a 20-10 first quarter lead. Mansfield found their footing in the second quarter, playing Troy even to keep it a 10-point deficit at the half 36-26.

Then in the third Mansfield used a 24-14 run to tie it up 50-all going into the final quarter. The Tigers would cut it to two with 23 seconds to play when Chandler Correll hit Jarrod Burd for a three to take their first lead of the game. Brady Andrews then hit some free throws to secure the win.

Bo Burleigh had 26 points on 12-of-14 shooting along with 16 rebounds, three steals and two blocks to lead Mansfield while Bryce Zaparzynski added 12 points and six rebounds.

"It was a great win for us because Troy's a good basketball team," Mansfield coach Kipper Burleigh said. "A good win for us in their gym."

Despite the setback Troy coach Bob Woodward feels they are close to turning the corner after several players got a late start to the season with the football team going deep into playoffs.

"I was proud of our effort," he said. "We just are trying to get our legs back here and it was a positive step forward after having basically one week with our kids. Our kids are working hard and they are getting better. I give Mansfield credit, they are also working hard."

Mansfield won the JV game behind 18 points from Jordan Williams.

The Trojans travel to Northeast Bradford Saturday while Mansfield will face Williamson for their home opener Tuesday.

The Rams held off a late Panther charge to pick up an NTL boys' basketball win Tuesday.

Wyalusing led 16-8 after the first quarter but Northeast fought back in the second as they out scored the Rams 13-10. The Panthers then scored 21 points in the third quarter to take a 42-41 lead into the fourth.

Wyalusing would out score them 11-8 in the final frame to secure the win.

Jordan Goodwin had a double-double in the loss for the Panthers with 19 points and 16 rebounds along with six blocks. Nik Geiser added 11 points while Mason Merrill had 10 with four assists. Andy Seeley scored six while Elijah Arias had four points, four assists and three steals.

The Rams travel to Sayre Saturday while Northeast hosts Troy.

TOWANDA - The Black Knights got 26 points from Noah Huff as they picked up an NTL boys' basketball win Tuesday.

Towanda led 19-8 after the first quarter with Liberty mounting a second quarter comeback. They would cut it to 21-17 but the Knights pulled away to take a 40-19 lead at the half. They would out score the Mountaineers 29-13 in the second half.

Towanda won the JV game 41-30 behind 12 points from Landon Brown while Liberty's Darrell Carrol had 14.

The Warriors out scored CV 27-14 over the middle quarters to pick up the NTL boys' basketball win Tuesday.

The Indians held a 10-8 first quarter advantage but Williamson used a 15 point second quarter to take a 23-18 lead at the half. They extended the lead more in the third as they out scored CV 12-6 and held on in the fourth.

WELLSBORO - The Hornets out scored North Penn 37-22 in the second half to pull away for the NTL boys' basketball win Tuesday.

The Hornets took an 18-6 first quarter lead but the Panthers fought back in the second, out scoring Wellsboro 12-5 to cut the deficit to 23-18.

Then in the third the Hornets out scored the Panthers 22-12, followed by a 15-10 fourth to seal the win.

Nick Marple rounded out the scoring with three points.