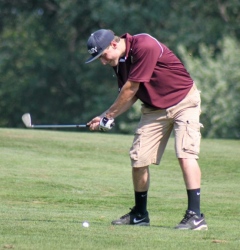 WAVERLY, N.Y. - The Towanda golf team opened up the NTL season with a victory on Tuesday, scoring 346, while Wellsboro had 355, Athens had 381, Mansfield finished at 395, Northeast Bradford was at 416, Northern Tioga finished at 443 and Sayre had 475.

This year the top four scores out of six golfers are scored.

Towanda was led by David Rodenhizer, who was the medalist with a round of 78. Nick Innocenzo shot 84, Hunter Gordon shot 88 and Josh Cole-Camp had a 96. The other golfers for Towanda were Mitch Shoemaker (104) and Ryan Cuddy (107).

"Our recipe for success this year is going to be the same, we have got to have our top three guys play well and we have to have one score out of four, five and six that is solid and we got exactly that today," Towanda coach Tim Farley said. "Rodie (Rodenhizer) is very capable of getting hot and going low. He did exactly that, started out great and kept it together at the end. Nick (Innocenzo) and Hunter (Gordon) did their jobs and I was really pleased with the way CC (Cole-Camp) finished up. He kept it together and got that all important fourth score, that was big for us. I want to really commend him on that."

Wellsboro got an 88 from Brett Kendrick and Blair Carson, Dillon King and Zach Bower all shot 89. The other golfers were Tyler Kennedy (110) and Garrett Worden (123).

"Wellsboro is going to be steady," Farley said. "They are a little deeper than we are, that is going to be their recipe for success, having four consistent, solid scores and when we get the best of them it's going to be doing exactly what we did today. Good, good day for us."

Athens was led by Zach Sitzman at 87 and Patrick Cole shot 93, while Jacob Aquilio finished at 96 and Reagan Martin had a 105. The other two were Mason Hibbard, who finished at 111 and Sam Rockwell at 116.

Mansfield got an 87 from Ryan Campbell and an 89 from JP Shaw. Jarrod Burd shot 97 and Max Colegrove finished at 122.

Northeast Bradford got a round of 90 out of Ben Abell and Roland Pythila shot 102, while Michael Wallitsch shot 111 and Nate Watkins had a 113. The other two were Nick Geiser (116) and Jared Harris 9118).

Northern Tioga was led by Nick Cevette at 94 and Caleb Fitzwater shot 108, while Casey McLaughlin had a 119 and Tyler Melko finished at 122. The other two were Josh Hamblin (123) and Troy Adriance (125).

The other two for Sayre were Dylan Conklin at 144 and Tyler Palumbo at 172.

Wyalusing had a pair of golfers compete as individuals, they did not count in the team standings. Holden Hitchcock had the third lowest round of the day at 86 and Jordan Salsman shot a round of 97.