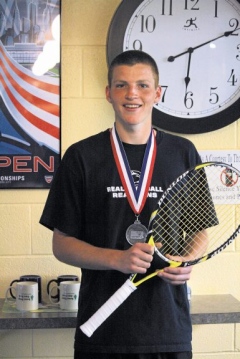 "Baseball was my life," said Rodenhizer. "But then I picked up a tennis racquet and it just went from there."

Where it went for Rodenhizer was a spot in the District 4 Boys Tennis Singles Championship match against Lewisburg's Ben Koch Monday at the West Branch Tennis Club.

Rodenhizer fell in three sets to Koch in a two-and-a-half hour match that will be one for the ages.

"It was an amazing match," he said.

Rodenhizer, the top seed, dropped the first set to Koch 6-4 but battled back in the second set.

With the score 5-4 and having serve, Rodenhizer faced seven deuces and fought off Koch four times until the seventh when he was able to win the game and the set 6-4.

That forced a winner-take-all third set.

That set was moved to another court at the tennis club because the court the finals were being played on was reserved.

The new court seem to suit Rodenhizer well as he broke Koch to start the match and held serve to make it 2-0.

But then Koch stormed back.

The Lewisburg senior, the second seed, won the next four games to make it 4-2 and looked to have control of the match.

But Rodenhizer still had some left in the tank.

The Towanda junior rolled off 14 straight points and was up 5-4 and was two points away from winning the district title.

"I couldn't find it in me to finish it out," said Rodenhizer. "Ben played amazing tennis.

"I won the first two games and then he battled back to win the next four and then I won the next three."

But Koch had a run left in him.

Koch won the next 10 points and found himself up 6-5 and needing two points to win the district title.

Rodenhizer stopped the run but Koch got the two points he needed and won the title.

For Rodenhizer, the silver medal is an accomplishment after one of the longest district championship matches in recent memory.

"It was an amazing match," he said.

By virtue of his silver medal, Rodenhizer will advance to the PIAA Class AA Boys Tennis Championship March 24 and 25 at the Hershey Racquet Club.

"It's a honor to be advancing to states," said Rodenhizer.